Designing around Debate: The Gender-Neutral Bathroom

“Creating an equitable city implies that every citizen has their needs met”, states architect Wanda Dalla Costa at a time when metropolises were noticing change. Architects and the public have started to acknowledge the gender-driven design of public spaces. Across the world, urban areas have been a site of discrimination and danger to the LGBTQ+ community. Gender is demonstrated in public zones that promote visibility and interaction between people. An arduous challenge lays upon architects and plans to design fair environments and equitable spaces. 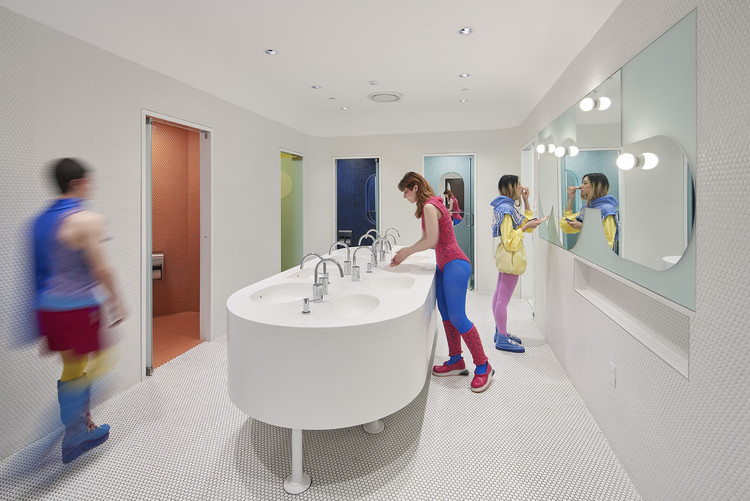 One such partial public space, that seems more private, are shared toilets. When it comes to gender inclusivity, toilets have been met with resistance and heated debate. For transgender people, the decision between using the men’s or women’s bathroom can be tough, even harmful. Nearly 70% of transgenders, in particular trans women, have undergone verbal harassment in gender-segregated bathrooms while almost 10% have reported physical assault. Activists have proposed the idea of ​​“gender-neutral” toilets to prevent such atrocities, and prototypes have been mushrooming across countries like the United States, Canada, China, India, Nepal, Thailand, Brazil and Japan.

The modern-day gender-neutral bathroom is simply a public toilet that is accessible and designed for the use of any gender group. It can take the form of a single-user toilet, similar to those in private residences, or as a multi-user communal bathroom. Single-user toilets are straightforward in design – a washbasin and water closet enclosed in a private room. This typology maintains the privacy of the user and has worked well in shared environments. Multi-user public toilets, on the other hand, have required modifications in their designs to better cater to the public’s concerns.

Hesitancy is a significant hurdle behind the widespread acceptance of gender-neutral toilets. Historically, gender-segregated bathrooms have been the norm. Changing opinions on gender norms has fueled a shift to unisex facilities, consequently uncovering some people’s discomfort with the idea. Apprehensions around the concept stem from a perceived threat to safety and privacy, especially when it comes to unaccompanied children.

Embarrassment around other genders also holds people skeptical about a communal toilet experience. Women may feel uncomfortable tidying up in front of the mirror or attending to their menstrual needs in unisex bathrooms. They may also find public toilets distressing to use for hygienic reasons. Individuals suffering from a “shy bladder” could feel self-conscious around other gender groups in such environments.

The gender-neutral bathroom appears challenging to deploy in some countries, owing to the different cultural ideas around modesty, gender, and gender segregation. Many religions and cultures prohibit sharing intimate spaces like toilets with unrelated people of the opposite sex. Societal notions around menstruation may also make it difficult for the international spread of the multi-stall gender-neutral bathroom.

When it comes to user safety, the other side of the debate makes a good case. Gender-neutral toilets not only provide secure experiences for trans and non-binary users but also for children and the elderly. Carers can accompany their dependants to the bathroom and assist them with ease. Unisex bathrooms would also support equal parenting by making changing and feeding rooms accessible to mothers and fathers.

A long line usually precedes the door to the ladies’ room. Women usually take longer in bathrooms due to childcare, menstruation, poor toilet design, and fewer cubicles. The average gender-segregated bathroom can have 20% to 30% more toilets for men than women, leaving the latter waiting in queues. Gender-neutral bathrooms level the playing field by making more toilet stalls accessible to women at a given time. These stalls need to be equipped with sanitary bins and storage facilities to make each stall truly accessible to women.

Unisex toilets are more cost-effective by cutting down the area that would normally be taken up by a pair of segregated bathrooms. Fewer fixtures and fittings also reduce the amount of time and money spent cleaning and maintaining them. Electricity and water bills are halved.

The debate highlights the fundamental problem around this social equity issue – toilet design. So far, there haven’t been standardized layouts or sets of rules on what exactly makes a bathroom gender-neutral. Not much thought has been given to the design of spaces based on the different needs of gender groups. These problems and concerns have shaped design briefs that aim to create ethical and comfortable toilet experiences for all.

Among recent examples, the architects at WorkAC collaborated with a queer student organization to design a gender-inclusive toilet at the Rhode Island School of Design Student Center in the United States. Equipped with a gender agnostic design approach, the team proposed a set of six enclosed water closets around a communal wash basin. Each toilet room contains a mirror, shelf, and small vanity light, allowing for moments of privacy.

Stalled! has gone a step further and designed prototypes for safe, sustainable, and inclusive bathrooms for people regardless of age, gender, race, religion, and disability. The cross-disciplinary team delivers a set of guidelines for inclusive toilet design online. The prototypes tackle problems faced by breastfeeding mothers, people needing to administer medication or perform religious rites, and people with physical or mental disabilities.

Most unisex washrooms have an open-plan design to create a busier and more visible communal space, ensuring user safety. They may have clear glass entryways or no door at all. Cubicle partitions and doors can be made full-length, and modesty features around urinals can be designed to enhance privacy. Workplaces have been using a combination of gender-neutral and gender-segregated toilets to meet everyone’s needs.

When designing inclusive and safer spaces, it is essential to integrate the end-user during the planning process. Diverse groups of people provide a variety of viewpoints for designers to work with, although resulting in dispute. Architects can contribute to social issues by lending an unbiased ear to the demands of the people to design spaces that seek to benefit all its users. There is no good design without debate.