Design Trends: The New Remodeling of Homes in Barcelona

Nowadays, the integral reform of flats in Barcelona is one of the most common activities for both freelance architects and local architectural studios. This is not surprising in a city with more than 4,000 years of history in which there is a lot of buildings and little room for new construction.

Although the pandemic, along with the implementation of ‘working from home’ that came with it, pushed many inhabitants to move from the city centers to the outskirts, Barcelona is still one of the most populated cities in Spain and continues to welcome new “future locals” month after month, year after year.

There is no doubt that it is a city that is liked. It is liked for its geographical characteristics: it is close to the sea and the mountains, for its Mediterranean climate, for its rich cultural and educational offer, for having become a focus of technological development in recent years and for many other things. Therefore, and despite the fact that living in such a busy city can often be overwhelming, people continue to choose it as a place to live.

Access to housing in this city is an issue that is always on the table and under constant debate, it is not easy. However, those citizens who are lucky enough to be able to acquire one, often opt for a property to be remodeled, or one that has already been remodeled by an investor.

This is where the power of the imagination of the architectural professionals who design these transformations comes into play. Thus, by combining old and new elements, playing with colors and making the most of the spaces, they achieve excellent results – and often with very reduced budgets -, improve the quality of the property and raise the quality of life of its future inhabitants, those who will transform it into a “home”.

Here are 5 examples of inspiring flat renovations in different emblematic neighbors of Barcelona.

Keeping a low construction budget, for the refurbishment of this house in the Sants district, we sought to create a calm and sober atmosphere, using natural materials, while maintaining a low budget. With a program designed for two people, open spaces were proposed, avoiding rigidity and trying to make the most of natural light.

The floor of the flat is a particularly picturesque element that takes on special prominence due to its intense colors in contrast to the sober colors chosen for the walls and ceiling, achieved by recovering most of the original hydraulic flooring. 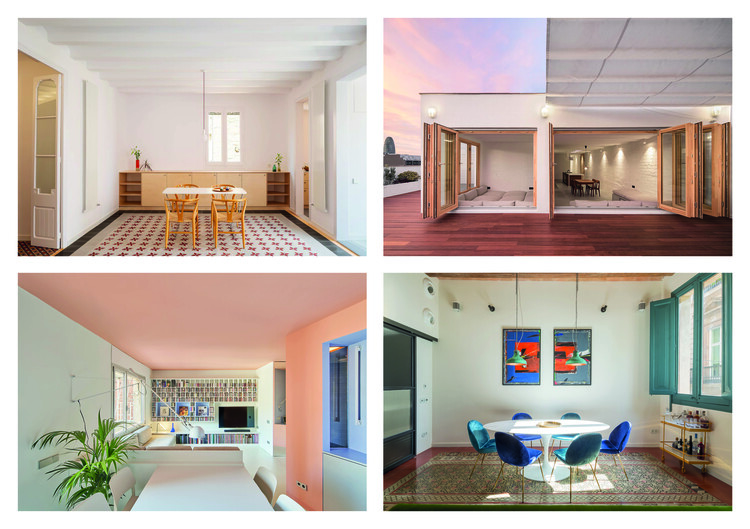 The dwelling is located on the first floor of a building built in 1950, intended for middle-class housing eligible for subsidies, in the district of La Nova Esquerra de l’Eixample. With less than 50 square metres, a volume corresponding to the lavatory was planned, with a continuous strip of kitchen and cupboards in the party wall opposite the entrance. One particularity to be resolved was the design of a place to house the owner’s collection of more than 1,400 CDs and 1,200 vinyls, which is why integrated furniture was designed ad hoc.

The northeast orientation of the only exterior façade directs the choice of flooring towards a light surface to reflect the scarce incoming light, and a particular color is used for the ceiling-ceiling to make it an element that conveys warmth and comfort.

Apartment in the Heart of Poblenou / mira architecture

Poblenou, a former industrial district in Barcelona that has maintained its industrial and factory essence, has been remodeled in recent years to become a fresh and contemporary neighborhood. The flat, a loft with access to a large terrace, is located on the top floor of a building in the heart of the neighborhood, configuring a space that connects with both the city and the sky.

Materials were chosen to hark back to the area’s industrial past, such as concrete, steel and brick. Calm, neutral concrete tones were used: polished floors and light wooden window frames. There is a great warmth in the space thanks to the sunlight cascading in, along with the sky, from the large windows and skylights. On the other hand, the traditional corrugated roof – the Catalan vault – is preserved, as well as leaving the brick exposed in sections, reaffirming the connection with the history of the site.

The flat is located in the historic center of Barcelona, ​​with direct views of the sea and the immediacy of a square in the process of redevelopment. Taking these values ​​into consideration, it was decided to open up the dwelling to the street and focus the most functional areas in the less luminous part, with a new layout proposal.

A combination of materials was chosen in keeping with the original spirit of the existing elements. The hydraulic floor was recovered in the living room and noble materials were chosen, in accordance with the chromatic range of the floor. To define spaces, sliding doors were used that respond to different options of circulation and transparency. In order to optimize the use of space, in some rooms the existing high ceilings were used to create storage spaces.

Conceived in the year 2019 and built during the months of confinement, the reform project of a flat in Barcelona’s Gracia district places at the heart of the proposal how its spaces will be lived. Not only in relation to the needs of its inhabitants, a couple of musicians, but also in how the different pieces of furniture that shape it are arranged, beyond pure functionality.

The two rooms of the initial layout were kept at one end, facing a narrow, quiet street. The rest is freed of partitions to be configured in two spaces separated by a structural wall and communicated by a doorway and a window, both existing. Although the dwelling is not particularly large, this operation provides spaciousness. The corridor disappears and the different uses follow one another in an open but hierarchical space, where the custom-made pieces of furniture configure living and activity areas.