Demolished and Rebuilt: The Identity of Architectural Replicas

The rights to reconstruct Kisho Kurokawa’s iconic Nakagin Capsule Tower are currently sold on one of the largest NFT sites. While the tower’s demolition has begun earlier this year, the auction sells the right to rebuild the structure, in both the metaverse and in real space. The idea of ​​recreating the Metabolic building in a virtual space seems natural. It could allow a larger community to explore an iconic piece of architecture and encourage them to experiment with it, an initiative in line with Metabolist ideals. On the other hand, the idea of ​​reconstructing a demolished historical building in the physical world raises a different set of conflicting emotions. Architectural replicas are not the norm, but their existence raises questions regarding the identity and authenticity of works of architecture. 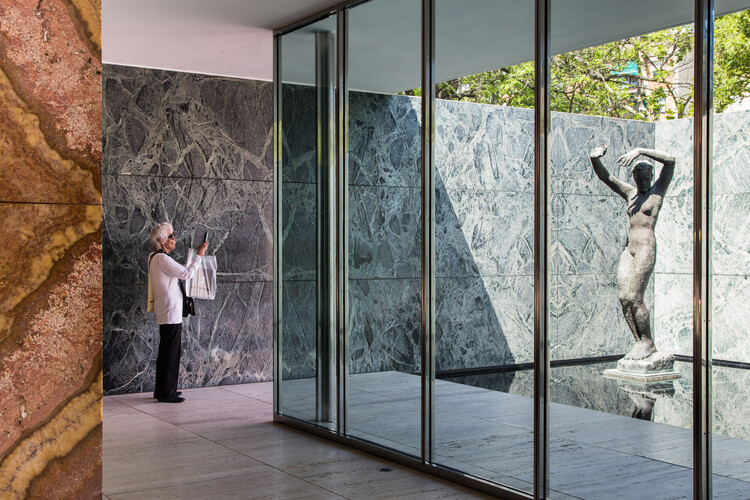 The decision to demolish the Nakagin Capsule Tower, built in 1972, was made due to the structure’s precarious state and incompatibility with current seismic standards. Even though the most sustainable options would be to reuse built structures, the need for demolition is often based on more determining factors: prolonged neglect, decay, or the presence of dangerous materials like asbestos can render an unsafe facility. Some works of architecture were built as temporary structures, while others represent symbols that no longer align with the population’s ideals. Regardless of the reasons, not many intentionally demolished buildings are granted a second life.

However, there is one example of an iconic building that was demolished and brought back from the rubble four decades later: Mies van der Rohe and Lilly Reich’s German Pavilion, currently better known as the Barcelona Pavilion. This structure is widely recognized as a canonical building, one of the key structures of the Modern Movement. Built in 1929 as part of the International Exposition of Barcelona, ​​the pavilion was intended to represent the face of Germany after WWI as a progressive and modern culture, yet still rooted in its classical history. It was always intended as a temporary structure, so after the exhibition ended, the pavilion was soon dismantled, in January 1930.

The Contemporary Approach to Rebuilding Cities Post-Disaster: The Case of Beirut

In 1955, architect Oriol Bohigas proposed rebuilding the pavilion by reusing its steel structure. He contacted Mies, who agreed with the idea and offered to redraw the plans, as the original ones were lost. Despite this, the project was not carried out for lacking support from the authorities. Other unsuccessful attempts were initiated over the years. Only in 1981 the initiative finally prospered, due to a favorable position from Barcelona authorities. One of the main arguments in favor of rebuilding it was recognition as “one of the fundamental works of the twentieth century”, quoting Bohigas’ expression. The project was commissioned to Catalan architects Ignasi de Sola-Morales, Cristian Cirici, and Fernando Ramos.

An undisputed premise here was the concept of a reconstruction that would interpret as faithfully as possible the idea and the material form of the 1929 Pavilion. – Ignasi de Solà-Morales.

Despite the extensive research undertaken to develop the new plans, elevations, and sections, the new pavilion, finished in 1986, is not a perfect replica. Some of the differences were due to the lack of information about the original structure, but some were intentional. The new structure is built for permanence, so a series of changes were done to ensure longevity: the 1929 “Catalan vaults” foundations have been replaced with poured concrete ones, harder travertine was used, the roof and drainage systems were improved and permanent exterior doors were mounted.

The 1986 pavilion also corrected aspects of the original structure that are considered imperfect representations of the architect’s intention. In 1929, due to the scarcity of green marble and travertine, the exterior walls and the rear part of the pavilion were not clad in these, but painted green and yellow to resemble the stone. The replica corrects this and has all walls clad in stone. With all the improvements, one could argue that the copy is in fact better than the original. We intuitively reject this premise, yet it raises questions regarding the viability of copies of architecture.

We have no doubt that all those of us who played some part in this undertaking are conscious of the distance between the original and its replica. Not because the quality of its execution is inferior, which is not the case, or because it was impossible to determine exactly how all of the details of the building had been resolved, but because every replica is, indisputably, a reinterpretation. – Ignasi de Solà-Morales.

Philosopher Nelson Goodman’s system, detailed in his book “Languages ​​of Art”, offers an insight into the relationship between an original work of art and its copy. He divides arts into two categories: autographic arts, that cannot be replicated, and allographic arts, that can be. The first category includes arts such as paintings or sculptures, where authenticity is defined by the history of production. Each brushstroke by a master represents a step that can only be imitated, making any copy is a forgery. On the other hand, allographic works such as literary texts, music, or choreography can be endlessly multiplied without losing value. Their authenticity lies in the abstract notational system.

If we consider architecture an allographic art, based on the notational systems defined by the architect, then all instances of a building are equally valuable as long as they comply with the original plans and details. This would be however an oversimplification, as the histories of production contribute to defining the two buildings. The opposite cannot be entirely true either, as the replica is, if partially, an authentic representation of the architect’s intention. A better understanding of architectural works would be as hybrids, further emphasizing the complexity inherent in architecture.

The important status of a building acquires is often the underlying reason for creating its replica. The Barcelona Pavilion is not a reconstruction of a national pavilion representing just one country. It is the reconstruction of one of the most important and early representations of the Modernist Movement. The free program of the temporary pavilion allowed Mies van der Rohe and Lilly Reich to create one of the purest expressions of a radical movement in its early stages. Whether or not the Nakagin Capsule Tower could acquire a similarly relevant status and a strong enough motivation to be rebuilt is difficult to tell.