Crafting for Contemplation: The Minimal vs. The Ornamental

What the pavilion is named tells the viewer a lot more about its intentions as a spatial experience. Titled Black Chapel, it houses a spacious room with wraparound benches, and an oculus above that allows daylight to filter into the space. It’s a fairly minimal interior – designed as a site for contemplation and reflection. This minimal quality of Gates’ Serpentine Pavilion raises particularly interesting questions. How artists and architects opt for a “less is more” approach when designing meditative spaces, but also how these introspective spaces have been equally enhanced by ornamentation. 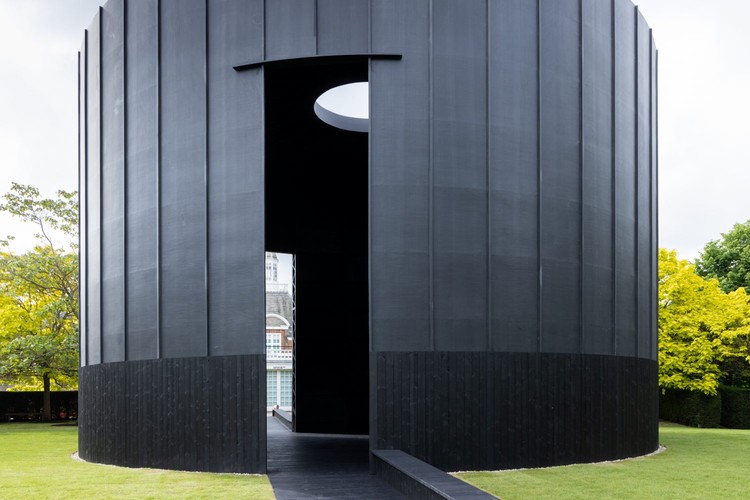 In an architectural sense, minimalism describes architectural designs condensed to their essential elements. An emphasis on space, form, light, and materials – with roots in the Bauhaus movement of the 1920s. Spanish architect Alberto Campo Baeza is arguably the biggest proponent of minimalist architecture in its most extreme sense, the monochromatic residences of Casa Gaspar and Turégano House being white cubic forms virtually absent of furniture or ornamentation.

These, however, are homes – spaces that cater to a variety of domestic happenings, having to achieve the appropriate balance of private and public. Spaces that aim for introspection, however, such as churches and chapels, are another matter entirely.

Throughout history, the enduring image of a church has been one of visual complexity, structures such as the Basilica of Sant’Apollinare in Classe internally consisting of arches and a lavishly decorated apse. Mosques have been similarly associated with ornamentation in everyday conversation, Jama Masjid in the Indian state of Uttar Pradesh is a complicated assemblage of domes and arched gates.

When these spaces of reflection go against this norm, it makes for an entirely different spatial environment. Tadao Ando’s 1989 Church of Light is an explicitly minimalist church, featuring a crucifix-shaped slit that partly drapes the space in daylight. Externally and internally, the building’s façade is a gray reinforced concrete made up of a single texture – a design choice that emphasizes the humble quality of the building, but a design choice that can also be criticized for being unrefined and thus distracting.

A glance towards Gates’ Serpentine Pavilion reveals parallels to Ando’s religious structure. The pavilion – similar to the Church of Light – is unapologetically honest to its materials, paneled walls made out of painted plywood making up a dark interior only lit by an oculus and almost ten-meter-high entrance and exit openings.

Whether the space does work as a site for contemplation is up for debate, but it makes a strong case for the uncluttered room as a venue for deep thinking. A chasm of space and minimal visual elements are all hallmarks of minimalist architectural interventions that look to eke out a mood of self-examination – but eking out this mood through architectural design can be a complicated, unclear subject.

In the Mexican city of Acapulco, architecture firm BNKR designed Sunset Chapel – intended as a place of mourning. The end result was an angular form that cut into Acapulco’s landscape – blending into the rocky terrain. Much like Ando’s church, the concrete interiors and exteriors are left untreated, the “honesty” of materials once again providing an enduring design approach. This chapel, however, is far from an insular experience. Openings on all sides of the church mean that as the interior is practically laid bare, the surrounding landscape takes full focus.

The paradox is that this minimalist architectural approach in the Sunset Chapel is instead crafted to maximize the visual vibrance and richness of the Acapulco Bay scenery. Instead of a more inward-looking design as in the Church of Light, BNKR maximizes the connection to the outside. This comes with an important caveat, however. The Church of Light is located in urban Ibaraki, while the Sunset Chapel’s more rural location allows for contemplation to be achieved by looking outwards. Research has shown, for instance, that the sight of trees calms the body, making us more relaxed.

Black Chapel’s other influences include the Ugandan Kasubi Tombs in Kampala – burial sites for kings of the Buganda Kingdom. The Muzibu Azaala Mpanga – the main building – was, like Black Chapel, Intended as a site of reverence, and a site for congregational activities. Its minimal internal architectural language – wooden poles supported by a thatched dome, is supplemented by the presence of woven concentric palm fronds that make up a decorative, ornamental ceiling.

Gates’ Serpentine Pavilion, ultimately, visualizes a contemplative space as one that contains fewer internal architectural elements. Much like Ando’s Church of Light, well-defined views of the surrounding context are limited in favor of creating a more closed-off experience. But much like Muzibu Azaala Mpanga, there’s the careful consideration of decoration, visible in the checkerboard pattern formed by the vertical wooden trusses, and a series of new tar paintings by Gates that frame what would potentially act as a backdrop for performances.

Is Black Chapel really the architectural result of a “less is more” approach for introspective spaces, or is it a case study of how this approach is harmoniously fused with more ornamental sensibilities?

Perhaps this reflects how minimalism can sometimes be an imperfect term that leaves little room for nuance. And perhaps this also reflects the messy nature of design and architectural labels – and how designers like Gates seek to operate outside that framework.