‘HOUSE WITHOUT WALLS’ BY CHAOFFICE

Settled in the tranquil city of Jinan, China‘House without Walls’ is a restoration project for an office-home by ChaOffice. Growing tired of the plethora of urban issues in Beijing, the owners, a young couple, both of whom are designers, desired a much calmer, more spacious home with a lower cost of living. The restorative plan aimed to create an open, breathable space by combining the collection of small rooms into one entity. Following a minimal, modern aesthetic influenced by 7th century Dutch design and 20th century Soviet style, the architects used reinforced concrete walls to structure the apartment, combined with sand-colored plywood for its simple furniture. A grand table at the center of the new space provides a place for a variety of different home and work activities.

Accordingly influenced by the covid epidemic at the beginning of construction, the designers approached the restoration project with a new reality in mind–an attempt to redefine spaces in a small apartments. Fortunately, the building structure consisted of a system of supporting short-limb reinforced concrete shear walls. For that reason, all non-structural interior walls were later removed to create a breathable interior. After the demolition of the existing apartment, the architects at ChaOffice found that it had transformed into a cave– inspiring them to reimagine a present day reinterpretation of a scene from the television series ‘Game of Thrones’, ‘where on a cliff on Dragon Stone Island the ancestral court of the House of Targaryen showed a cave-like meeting room within which was a huge table; the so called Chamber of the Painted Table’.

the grand table, viewed from the north window

all images courtesy of ChaOffice

The site was originally a standard apartment unit consisting of three bedrooms, a common living room, a kitchen, and two bathrooms located in a residential building which was built in 2006. It met the requirements of most modern urban residents, in particular for middle class. families with multiple members and sometimes even multiple generations. However, its collection of small rooms did not fit with the clients’ needs, and did not accommodate the grand table they wished to incorporate. ChaOffice’s spatial transformation led to several consequences: first, the separate collection of small rooms were into a single entity, combined enlarging the scale of space; second, light and shadows were no longer restricted by walls, but were instead more gradual and continuous.

The original plumbing, heating, and electrical facilities and core infrastructure could not be moved. As a result, the general location of both bathrooms remained the same, however the architects managed to enlarge the original master bathroom and wrapped it in a series of shelves and cabinets, which ultimately function as wall separators. The residence naturally divides into two parts – public and private – and a narrow corridor, enclosed by bookshelves, links them together. The corridor appears like a narrow dark passage in an ever expanding cave. The structural walls standing in the middle of the space become hidden boundaries. Within the space a series of semi-transparent curtains function as tangible, adjustable boundaries between the main bedrooms, kitchen, and the grand table. 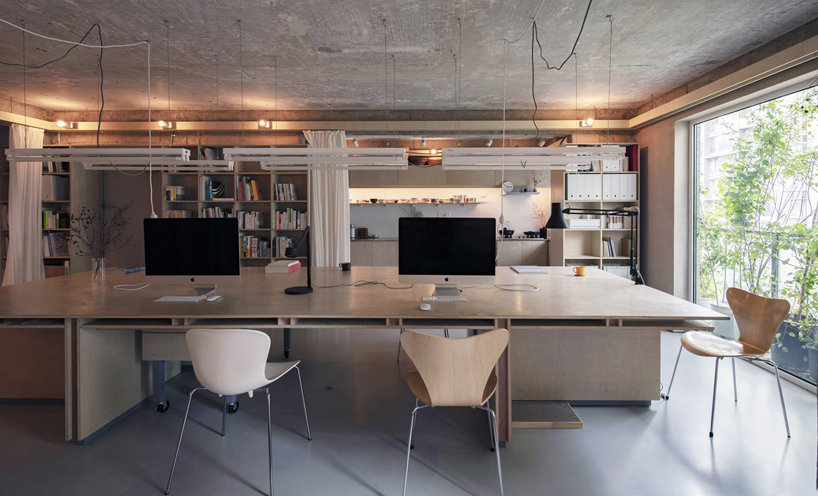 the studio and the grand table

An economic material blend EVOKING A SENSE OF modernity

The construction budget was set at only 200,000 RMB (around 28,000 USD) for the entire renovation of the 130sqm apartment. The majority of the construction utilized on-site carpentry using plywood as a key material for most of the furniture, like the table, bookshelves, a bed, kitchen cabinets, various pieces in the bathrooms, as well as a multi-functional double layer bed in the guest room. Due to the large size of the grand table, it is not suitable for dining, and so an additional, shorter sliding table with incorporated wheels was added to slide underneath its larger counterpart. Inexpensive birch plywood was used as both the structural material and final finish for all of these components. The existing concrete ceiling and structural walls were stripped of their previously applied finishings, which revealed a very unique, authentic and coarse texture.

Other walls between the site and the apartments were constructed out of concrete aerated blocks with an additional reinforcement layer of gypsum plaster. The original electrical circuitry was redistributed and no longer concealed, but rather directly exposed as part of the visual identity. Hanging metal rods supported a set of linear wooden rails running throughout the space in rectangular circuits following the pre-existing structural beams of the apartment. The wooden rails were used as conduits for electrical wiring, mounting structures for curtains, as well as lighting and electrical outlets. The exposed layer of the floor is made up of self-leveling concrete and the original decorational door was replaced with a simple steel fire door. 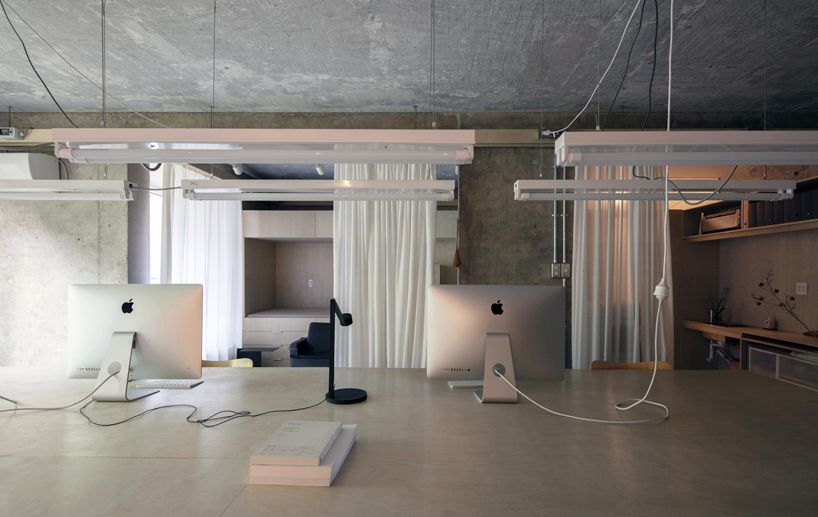 the grand table and the lighting system above

The material strategy applied reduced the cost of construction to a near minimum. With the remaining budget, expensive mosaic tiles were installed in the kitchen and bathrooms. For the exposed pipe work, switch plates, and light switches, the architects decided to use more delicate metal components rather than the usual plastic alternatives.

‘Although this is an interior renovation project, it is operated as a part of an ongoing series of house projects that we have been involved with in recent years, and the design is a sort of environmental experiment, getting rid of all unnecessary barriers and returning the space to its most basic form,’ explains ChaOffice. ‘It is about morphology and the continuity of spaces, objects, and actions, as the everyday life of its occupants traverse through a continuum of space and shifting lights; a test of a type of living space liberating peoples bodies and dynamics. I think this “partial” liberation has been useful during this era of the epidemic, in particular for those who are isolated at home.’ 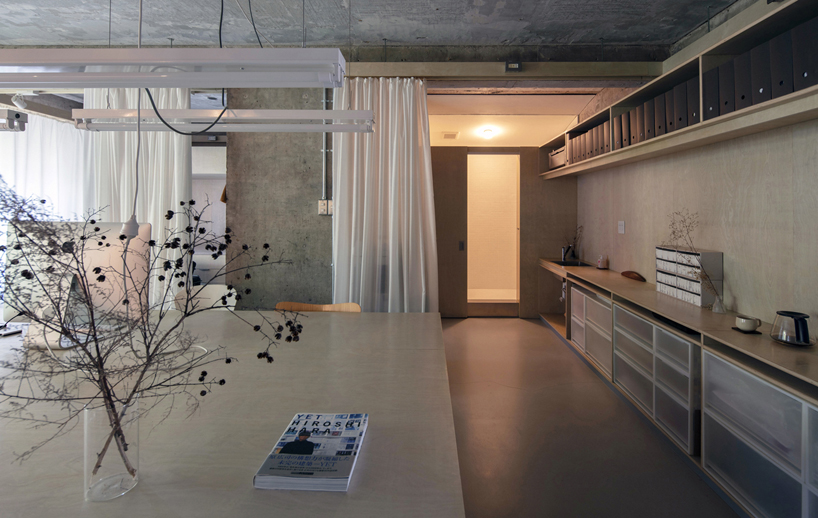 the studio -view from the entrance 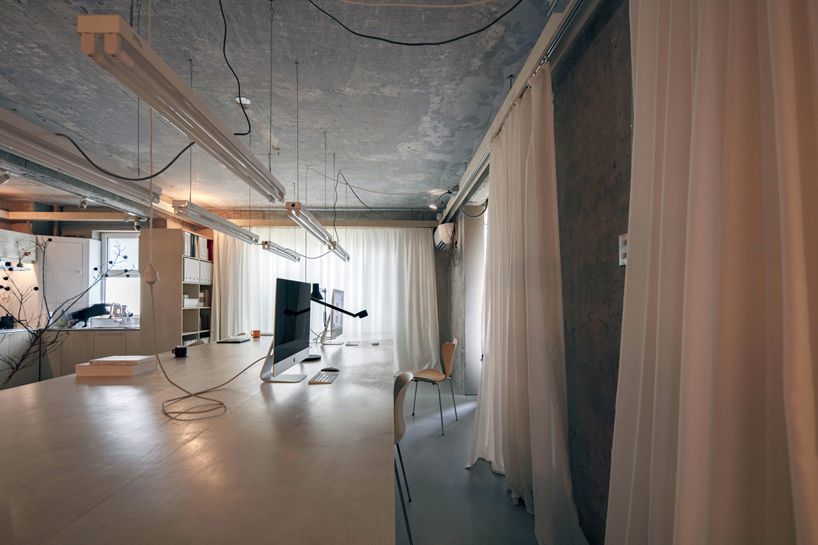 the studio and grand table view from the bathroom