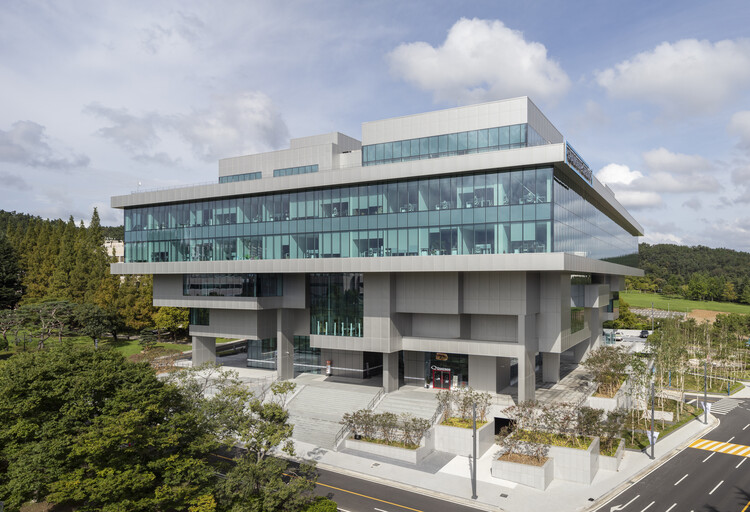 Future Lighthouse Factory – POSCO Changeup Ground is also a communication space that captures POSCO’s developing corporate spirit together. It should be a lighthouse-like architecture for young entrepreneurs who brighten the future and move toward a new world. The start-up support center is a space like a huge spaceship sailing toward the unknown universe. By implementing a huge mass made of iron as if it were floating architecture, it embodied an architectural image that soared.

Floating Architecture – It should be an architecture that acquires the degree of freedom opened by possibility as a space where you dream of imagining the future. As a floating architect, I would like to apply the concept of floating, floating, which acquires degrees of freedom. Through weightless thinking, various diversity that can be achieved through the philosophy of lightness was built. A basic unit box constituting a venture is formed as a medium platform medium, and a combination of boxes stacked weightlessly is formed in the lower layer by mirroring the mass combination in the upper layer. Opened by floating, architecture acts as a powerful tool to connect the urban relationship with other laboratories of the Pohang University of Science and Technology, which is free from physical reality and surrounding the land. If the urban context simply wanted to be a combination of similar mas, it was thought that the future context required a new architectural form created by urban roles. The degree of freedom at the intermediate ground level naturally acts as a device to strengthen and attract communication between interdisciplinary institutions. It is a response to the urban trend. The most urban architecture is the establishment of an acceptable relationship without interrupting the flow.

Mythical Imagination – Through the fact that it is floating, it draws the beholder into a dreamy and mythical world. It floats, separated from the ground. Cities and architecture are no longer simply tools that support the weight above the ground but become the subjects that dominate the physical gravity. The land emptied through floating is transformed into activity, abundance, and connectivity. It is not simply a functional space, but a kind of accelerator that accepts numerous urban elements. The start-up support center is a device that acquires such urban and social information; it is architecture as a new gene that changes architecture, and it should become a myth of new imagination.

Incubating Furnace – It should be a melting pot-like space open to future values ​​that induce innovation in which start-ups, education, and research are communicated and combined three-dimensionally based on infinite relationships and cooperation through new ideas and inspiration. It is an open space of imagination for the future and an incubation place that creates new genes by leading the world beyond POSCO companies. The incubating space should contain the mental value that enables the icon of innovation. Like a furnace that melts iron to make iron and creates iron plates and materials, this space should contain the value of inspiration, network, and communication and create a dynamic space that creatively expresses synergy combined with each other.

Creative Shared Space – The start-up support center should be a creative space to share each other’s work, be stimulated, and create synergy. While general research institutes and office architecture focused on the unit space they study, POSCO Changeup Ground tried to create the most creative communication by strengthening the sharing space of each unit space. Various sharing programs were reproduced based on maximizing the area ratio of the shared space rather than the unit space. In general, shared spaces such as corridors are expanded to shared spaces to create various spatial expansions. It becomes a refreshing space for start-ups who are immersed in 24-hour research, and another creative area that generates new ideas in different ways. This shared space has the concept of a three-dimensional pocket garden together and creates various qualities of relaxation. This shared space has various variations. Through various spatial changes in width and height, it is transformed into a complementary space for basic start-ups of physical education, rest, nature, deep sleep, and laundry, and is transformed into a polyform, open bar, and garden seminar space for various communication and seminars.

Universal Atrium – It constitutes a universal atrium as a shared space and circulation device that penetrates the whole. Through a three-dimensional atrium space composed of one, all levels are connected, and various programs and spaces of nature and the city are freely combined to form a complex communication space. The ground of the atrium is composed of a three-dimensional, short lobby space, where different types of events can be held. Lectures, discussions, exhibitions, media, and videos create creative discussion and communication. It is a weightless space composed three-dimensionally of the seminar space for communication, exhibition space, urban roads, forest, lounge space, play space, etc., and it is a space like a winter garden plaza where the landscaping is alive 365 days a year. On each floor, creative boxes were placed in various spots facing the atrium. Discussions and passions are shared in the open atrium space. Therefore, it becomes not an atrium for display, but a living space that is open to users and becomes a part of daily life.