The European Prize for Urban Public Space is a biennial, honorary competition organised by the Center of Contemporary Culture of Barcelona (CCCB), which, following its exhibition “The Reconquest of Europe” in 1999, decided to create a permanent observatory of European cities. The prize has been awarded since 2000, recognising the best interventions for the creation, transformation and recovery of public spaces in Europe.

The 2022 edition closed its registration on the 17th of May, reaching record participation figures, with 326 projects from 35 countries. The high level of involvement and representativeness confirms, in the current and future context, the relevance and importance of public space in the development of cities.

Here are the 5 finalists.

The restoration of the Catharijnesingel removes the traffic that used to occupy this public thoroughfare and reclaims the water to renaturalise and make a new public space accessible to pedestrians and cyclists. 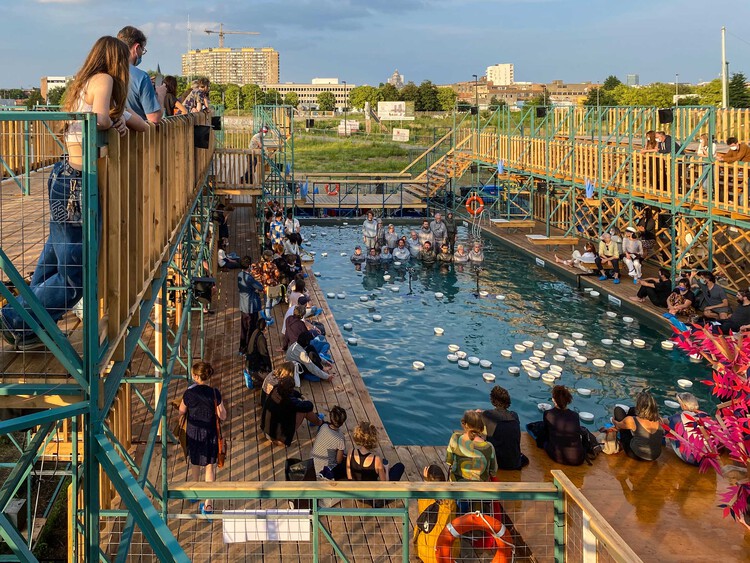 Flow is the first open-air swimming pool built in Brussels in forty years and was designed and built with the participation of more than fifty young people. The project consists of a temporary structure that creates a multi-generational meeting space where people can enjoy fresh air and water.

The simple and inexpensive modular system that the project adopts, which can easily be built with the help of many hands, is a good example of collective participation in the creation of active and healthy public spaces.

The project is located in an undeveloped landscape on the outskirts of the city of Lund and consists of a courtyard enclosed on three sides by brick walls salvaged from a demolished factory building.

The owner of the land decided not to go ahead with the urban development of the surrounding area and let the space take its course, open to the public. The aforementioned courtyard is a first intervention, an anticipation of the gradual evolution of the site, a hortus inconclusus.

The project recovers the prominence of the city’s historic fabric. The cars that occupied the surface were removed and the lost trees were regenerated as organisers of the space.

The proposal is very simple, the selection of materials and the recognition of the heritage of the place reactivate a space that had been taken over by the car and that now recovers its vertical dimension, giving support to different types of activities.

This garden is the result of a popular initiative to recover an abandoned site, which becomes a new type of public space. The project consists of a system of seedbed distributions and interstitial spaces in which events and meetings are held.

The result of this initiative is a new system, a model of urban space that introduces productive, cultural and social logics, integrating emerging natural elements as part of the community space.