Can Public Space be Created in the Metaverse?

The metaverse promises to revolutionize our way of life. By integrating immersive technologies like virtual and augmented reality (VR and AR), it hopes to add another layer to the way we experience everyday life. It is suggested that the metaverse will create virtual spaces where people can meet and share experiences regardless of geographical constraints. The possibilities seem endless: exchanging knowledge, encouraging professional collaboration, developing and democratizing art, education, culture, and even robust engagement. Social interactions are at the core of the idea of ​​a metaverse. This raises the question: how can the new, virtual spaces acquire the properties of public spaces? 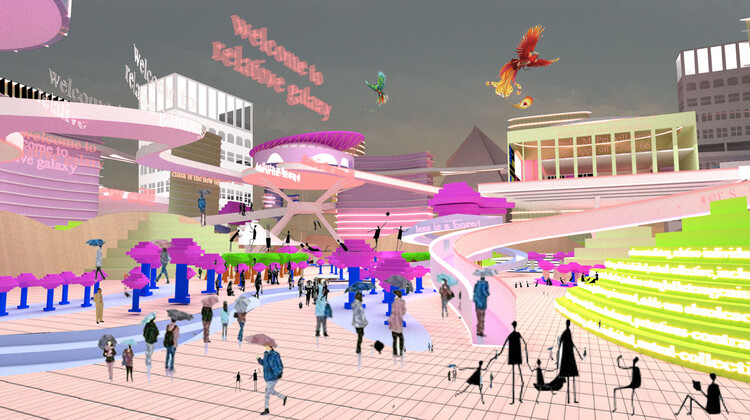 At the moment, there are two types of environments that allow people to come together and share experiences: physical and virtual, represented mainly by social media. Physical public spaces are some of the most attractive spaces that cities can offer. They allow for unstructured social interaction and their character is defined by the people using them. However, when the pandemic forced everybody into lockdowns, the limitations of physical spaces came into focus, with the move toward virtual social spaces proving advantageous in multiple ways.

Virtual platforms are places of encounter where anyone can curate their experience and, in some ways, control their exposure. Since the connection is not dependent on physical location, the global network offers a large pool of possible connections to choose from, with common interests and principles of being the aggregators that form communities. The medium also comes with significant limitations: the structure of the platforms dictates the types of possible interactions, and the medium is almost exclusively two-dimensional, taking the form of text, image, or video.

What Can Metaverse Planners Learn from Italo Calvino’s Invisible Cities

The metaverse promises to overcome both limitations and bring the best of both worlds by creating an immersive three-dimensional experience and allowing users to interact in a more organic, unstructured way. The term metaverse eludes a strict definition, but it generally refers to a virtual world built on blockchain, an innovative way to store information that allows users to interact with each other in a secure and private way, without relying on intermediaries. This decentralized system is also linked to the concept of web 3.0, an idea of ​​a new iteration of the Internet that incorporates decentralization, blockchain technologies, and token-based economics.

The metaverse is not a single product, in the way apps like Facebook or Instagram are, nor is it an operating system, like Microsoft’s Windows. Its development is likely to be similar to that of the existing internet, growing gradually as a constellation of technologies, platforms, and products, driven by a mixture of public and private initiatives. Currently, there are a few platforms that operate in a way that aligns with the concept of a metaverse, but, unlike the existing internet, there are no universal standards to ensure interoperability. Each of these platforms is free to create its native environment and set its own set of rules.

One major departure point from social media is the move toward 3D immersive environments, enabled by the integration of VR and AR technologies. This means that the experience of the virtual world is beginning to resemble more and more the physical one. Massively multiplayer online games are the first to experiment with these concepts, but newer metaverse platforms are counting more on the social aspects, thus creating environments that mimic urban environments. One such example is Decentraland’s Genesis City. The virtual city is composed of over 90,000 parcels, NFTs taking the form of squares of 16 by 16 meters in size. While most of them are privately owned, bought by private users, some parcels are kept as plazas and roads. Districts are another type of land, privately owned but reserved for themed communities, not up for sale.

Platforms such as this can be understood as social experiments and even critiques of urban environments. The distribution of land and the possibility to build freely on it has been speculated, creating a market for virtual real estate transactions. Business models can include selling NFTs such as tickets to events, e-commerce, or advertising revenue. Market forces like scarcity and speculation are currently driving the value of virtual land, while the aspect of utility is under-represented at the moment, partly due to the limited audience. As the pricing does not follow physical world patterns, but largely depends on the buyer’s view, the market is considered volatile.

Within the logic of virtual cities, where teleportation is more than convenient, the roads and plazas are irrelevant in terms of transportation, but they take on a different role. They provide visibility to nearby properties, becoming in fact spatial browsing tools that expose content, thus raising the value of the land. This demonstrates how similar premises can produce different outcomes in the physical versus virtual worlds.

Issues of identity and personal space also function differently. Public spaces in the physical world are to some degree self-regulated, with citizens applying subtle social pressure to ensure adequate behaviors. This has been proven difficult to translate to the digital world, and the problem visible on social media is likely to be heightened on metaverse platforms due to the sense of immersion. Companies like Meta are already announcing corrective measures, like enforcing a 4 feet personal boundary to protect the users from unwanted interactions.

The existing metaverse platforms offer just a glimpse into what the metaverse could mean. This is a fast-evolving field with great promises, and many of the benefits envisioned will only be unlocked by advances that are still to come. While the metaverse can expand access to certain aspects of social life, it must be seen as a separate entity, not replacing the basic need for face-to-face interaction and connection. There are risks ad challenges in developing this new typology of virtual spaces, but also a huge potential for social and economic progress, given that they are developed collectively, transparently, and in a socially-responsible manner.