DIGITAL FILM PREMIERE ON DESIGNBOOM FROM 25 TO 27 NOVEMBER, 2022

designboom partners with Bêka & Lemoine for the exclusive digital premiere of ‘Big Ears Listen With Feet’, their latest documentary Focusing on the moving personal story of Thai architect Boonserm Premthada of Bangkok Project Studio. Recipient of THE DESIGN PRIZE 2021|22 in the category social impactPremthada creates a kind of architecture that fosters respect and humility, taking into account ‘not only humans, but also nature and the environment that have always existed alongside humans.’ Due to the hearing impairment he has lived with since birth, the architect has developed an alternative way of listening using his whole body as a resonance chamber. Echoing this personal experience, his professional work revolves around an ‘architecture of the senses’, where sound vibrations become the voice of space through an enormous amount of materials.

Instead of focusing solely on his buildings, ‘Big Ears Listen With Feet’ delves into Boonserm Premthada’s life story through a one-day journey across Thailand. Bêka & Lemoine’s intimate road movie introduces viewers to the places and people that have shaped the architect’s unique identity and sensibility. ‘We pay a lot of attention to forms of vulnerability and how you can find beauty, poetry, and strength in these forms,’ The acclaimed artist-filmmaker duo explains. ‘Despite the many adversities he had in life, he managed to achieve such an incredible and very demanding work with extraordinary results, that we were very interested in giving voice to such an individual. It gives hope to so many people, compared to the success narratives of perfect, invincible individuals. We are not interested in perfection, because we don’t find any poetry in perfection.’ designboom spoke with Ila Bêka, Louise Lemoine and Boonserm Premthada to learn more about their collaboration. Read our interview in full below.

During the long screening weekend, which will take place from Friday, November 25, to Sunday, November 27, 2022, the full film will be available to watch. at the top of this page. The online premiere also coincides with the film’s Italian premiere at Milano Design Film Festival, where it will be presented on November 25, at 9:30pm, at Anteo Palazzo Del Cinema. More info about ‘Big Ears Listen With Feet’ at MDFF here.

designboom (DB): What drew your interest to the life and work of Boonserm Premthada? What was your first encounter like?

Louise Lemoine (LL): The film starts with a Zoom conversation, and we actually met during that conversation. We asked him to talk because we are currently working on a book on the experience of space in a sensorial and emotional way. It’s a book that brings together very sensitive people from different generations, different continents, and different cultures. Of course his work came across, because these are topics he relates to very much, and we were interested to have his contribution. At that point we actually only knew his work, we didn’t know anything about his life story. Going through the conversation and meeting him, we thought he was so moving and amazing in his life, his work, and his commitment to small communities, so we thought it would be an incredible opportunity to know more about him. That’s why we flew to Bangkok to meet him and make the film. 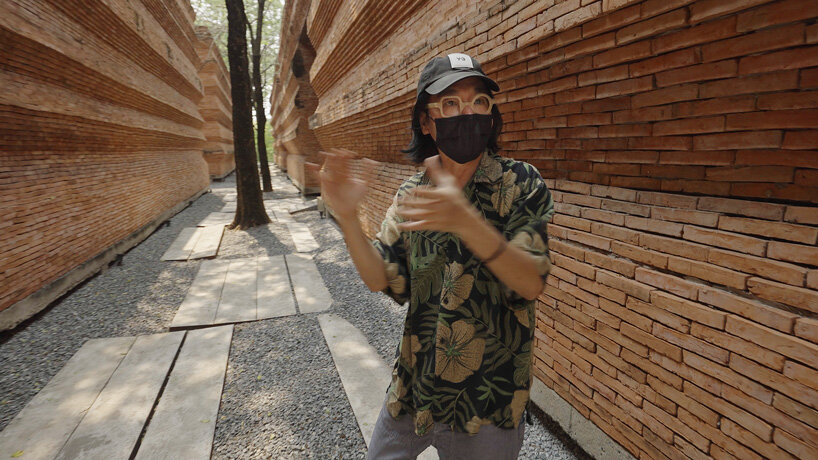 DB: So the movie came about a little bit by chance, right?

Ila Bêka: (IB): We believe a lot in encounters like this, so every time we can, we really jump on such occasions and make films in this very spontaneous manner. We like to make films in the present. It’s about an experience that we shared with him and his wife, who was always there because he had a hearing problem. We didn’t want to make a film about his architecture, we just wanted to share a moment and an experience with him. The film is obviously going a little bit into his buildings, but the focus is on the places that move him the most. Actually he said that more than places, it’s the people that move him the most, so he brought us to meet some people that he likes. That’s the story of the movie. We spent one day, from four o’clock in the morning until the night, and we stayed with him going all around Bangkok, then to the countryside, and even in the center of Thailand with a plane and back the same day. It was really hectic, but we just wanted to share some moments with him because he is a very moving person.

LL: In our work in general, what we look for is the human story behind the architecture. That’s why, as Ila said, we focused the film on him, because we believe his architecture is the embodiment of visions and ideas regarding how architecture can impact the life of people. We thought he would be the real voice to let us fully understand his engagement as an architect.

IB: It is a beautiful story. Despite his hearing problem and even his background – he was born in a slum in Bangkok – he’s a very strong man. Now he is making very interesting, beautiful architecture and he is becoming a very important architect in Thailand and even worldwide. For us it was such a beautiful message, because architecture is normally something that is related to people of a different social level.

LL: We pay a lot of attention to forms of vulnerability and how you can find beauty, poetry, and strength in these forms. Despite the many adversities he had in life, he managed to achieve such an incredible and very demanding work with extraordinary results, that we were very interested in giving voice to such an individual. It gives hope to so many people, compared to the success narratives of perfect, invincible individuals. We are not interested in perfection, because we don’t find any poetry in perfection. 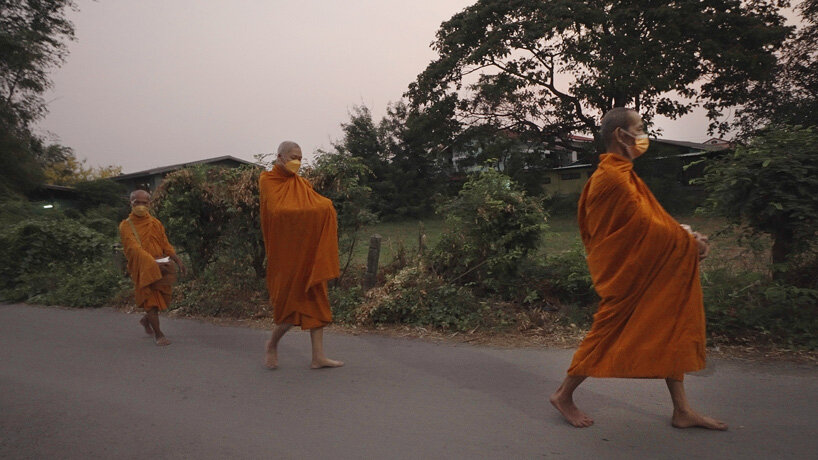 DB: What was your experience of Bangkok like? Did you come across places or encounters that are particularly memorable for you?

IB: The beginning of the day was very moving because we drove for one hour to Ayutthaya, the ancient capital of Thailand, to meet some monks. But more than the monks, we met the people who, every day at five o’clock in the morning, offer food to the monks. This was very strong because we saw so many people preparing food and giving it to them.

LL: It’s a very poor rural area, so this sort of devotion and this form of generosity is amazing. These people live with not much on a daily basis, but the monks survive this way, through the generosity of the inhabitants. It’s a ritual, something which I think is totally common everywhere in Thailand, but for us it was the first time to observe and document it.

IB: After that we went to the slum where he was born, we stayed with him there and went to the house of his mother and sister. It was also a very moving moment. Also, it was incredibly strong when we went to Surin, to Elephant Worldto see his buildings and the elephants. 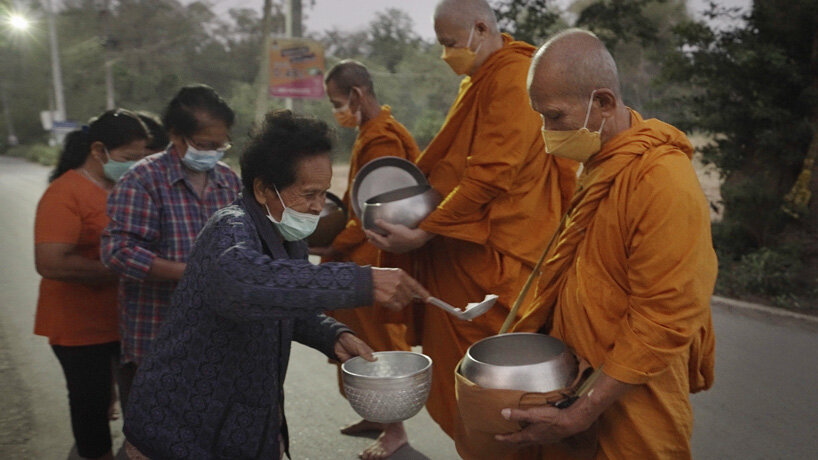 Every day at five o’clock in the morning, people offer food to the monks

DB: Can you tell us a bit more about the title of the movie?

IB: During our online conversation, Boonserm told us a very interesting story. As you know, he’s almost completely deaf and when he was a child, he tried to adapt to this problem to be able to listen to those around him. He discovered a way to listen to what they were saying through the vibration of the voice. We perceive sounds through the vibration of our voice, there’s a system that translates vibration into sounds. As his system didn’t work, he tried to transform his whole body into a resonance chamber to feel the vibrations through his entire body and not just through the ears. If you talk to him, he understands what you say thanks to this vibration. In the film you can see he is able to understand my voice because I have a low pitch so I create more vibration than Louise, for example.

When he started working with elephants, he discovered something very interesting. Even though they have very big ears, they don’t hear sounds through them. Instead, they hear the vibration through the ground, through the feet. So they hear much better with feet than with ears. Their ears are very big because they use them to cool down their blood since they always live in very hot places around the world. If you don’t know this, you think that elephants can hear very well because they have big ears, but in fact it’s completely the opposite. They hear very well through the vibration of the ground, they can hear other animals arriving from many kilometers away because they’re super sensitive. Boonserm told us that he thought he was like a little elephant, with little feet but very sensitive. So we thought that it was a beautiful image to call this film, ‘Big Ears Listen With Feet’.

LL: Elephants are not just a passion for him. Since this revelation, he keeps making projects with elephants, and working on them as a subject of research too.