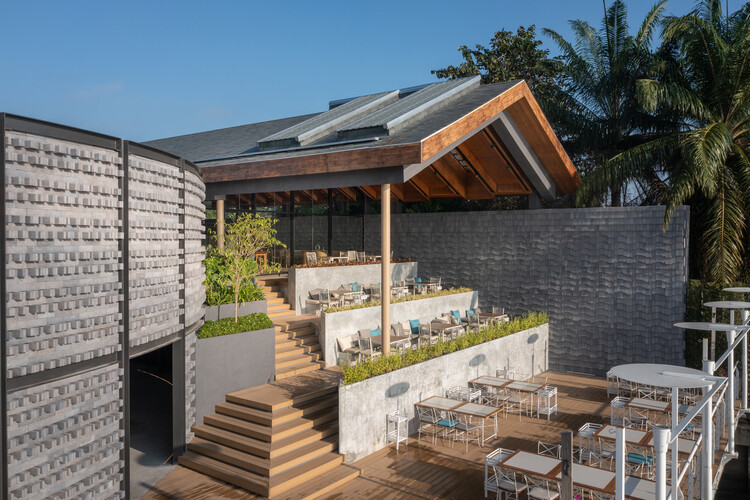 Text description provided by the architects. Loftily poised just by the Chao Praya River, “Baan Nhuer Nham” or the “House Above Water” is a cozy and intimate second-generation restaurant. Though it now sits on a rectangular plot of land that stretches from the road to the edge of the riverside, it once was a small, almost 60-year-old two-story building. To the owner, the decision to expand the property was made so it could accommodate an ever-growing influx of customers, whilst also going for being redesigned and decorated to attract even according to wider audiences to come. Built upon an old dam amid mature trees and persevering wild greenery, the designer of this expansion felt the property would best be highlighted by careful grooming and reinvigoration of the plot’s existing building. Rather than build an entirely new structure in place of the old and charming little building and dam, they would instead be juxtaposed and elevated against new features and adornments.

Right at the restaurant’s entryway, the designer thought to reuse aging wooden plans, wrought, and polished into a graceful archway that would serve to pull the attention of oncoming customers to a brightly lit garden. Accounting for approximately 50% of the property’s greenery, the garden acts as a natural filter to the grit and grime of the nearby road, keeping smoggy air and distracting noises away from the restaurant’s interior. The flora and fauna also serendipitously add to an atmosphere of comfort and relaxation. An illusion of extended spaciousness is then created by placing an elegant pond courtyard between the new and original buildings. The courtyard not only serves as a buffer between the old and the new, but also provides a multipurpose communal area. Here, restaurant staff can use the ample space to intimately welcome customers, set up a temporary stage or booths for activities during seasonal festivities, or simply prepare more seating during peak seasons.

Tall, curved brick walls surround the courtyard, its characteristic freeform shape keeping from boxing in the area, while also adding a subtle, playful curiousness through its leads and lines. The path tracing the courtyard’s pond also serves as a layer between the riverside and the lush interior to instill wondrous dimensionality. Together the greenery, brick walls, and courtyard are playfully illuminated with strays of natural light, all while allowing the river’s breeze to flow refreshingly through the restaurant all day long.

The newly added building was designed around the old one, though embellished with the bells and whistles of today’s modernity. It comes with two floors, is topped with a gable roof, and is designed to let the restaurant service customers in both indoor and semi-outdoor fashions. While the bottom floor was designed to be like the spaces under old, classic Thai-style houses – surrounded by wooden beams and a high wooden ceiling – the upper floor is given more flexibility via an open plan, able to be configured and changed as needed by the owner.

Under the eaves on the side of the river extends a mezzanine level, providing even more seating while also giving customers a wide, uninhibited perspective of the river. Views of the restaurant from the river are also enhanced, the mezzanine providing a break from the uniformity of the building’s overall shape. Away from the river and against the road is a final brick wall that lines the entire length of the property. Though at first unassuming, its meticulous stacked paneling was designed to mirror the rugged yet captivating waves of the nearby river. Against it, shadows dance lazily to the restaurant’s lights, its trance extending the wall’s full length, and its infallible connecting the outside and inside seating areas into one seamless area.

In keeping with the owner’s desire to bring customers closer to nature, the designer of this project mainly uses raw materials such as golden teak, bamboo, woven rattan, polished stone, washed sand, and gray brickwork. These materials not only celebrate the restaurant’s ancestry, being built upon a dam between natural greenery, but also intertwines the exceedingly fresh flavors customers are enjoying with the raw physicality surrounding them.

As it stands, the restaurant has operated for more than 60 years. Over its lifetime the nearby Chao Praya has done what every winding river has done before it: it has whittled away at the riverside, winding away from the land and soil. In lieu of creating a “retaining wall” that would only contribute to more flooding and environmental damage in the future, the designer of this project decided to play into the river’s nature. Thusly this project’s main goal is to complement the property’s new curvature with playful shapes and lines of its own, all while enforcing the structure with strength via pilotis and beams that extend beneath the river. This way the restaurant coexists rather than fights with the river.

In a similar fashion, the project was designed with Passive Design in mind, efficiently reducing the restaurant’s environmental impact while preserving and promoting the natural elements that surround it. This extends to the multipurpose courtyard, the indoor/semi-outdoor design, the open design of the new building’s top floor, as well as the many structural design choices that further the interplay of natural light and wind. The “House Above Water” and its expansion boast a new spectacle altogether in combining the natural elements with man, enduring, and thriving in the inevitable test of time.