“Architecture Can Be the Vehicle to Change How We Think About Traditional Typologies”: In Conversation with BIG Partner, João Albuquerque

Keen to shape buildings and cities in Southern Europe, BIG has opened its latest office in Barcelona, ​​Spain. Led by partner, João Albuquerque, the studio is seeking to create positive change and integrate into the city and the Spanish community. With a couple of projects spanning from the west to the east of the Mediterranean region, most notably Farfetch, and Fuse Valley campus in Portugal, the Joint Research Center in Sevilla for the European Commission, and the Gastronomy Open Ecosystem for Basque Culinary Center, BIG Barcelona is in constant evolution.

ArchDaily had the chance to talk to BIG Barcelona Partner João Albuquerque about the inception of the Barcelona office, his journey at BIG, and the firm’s upcoming projects and involvement within the Spanish and Southern European markets. 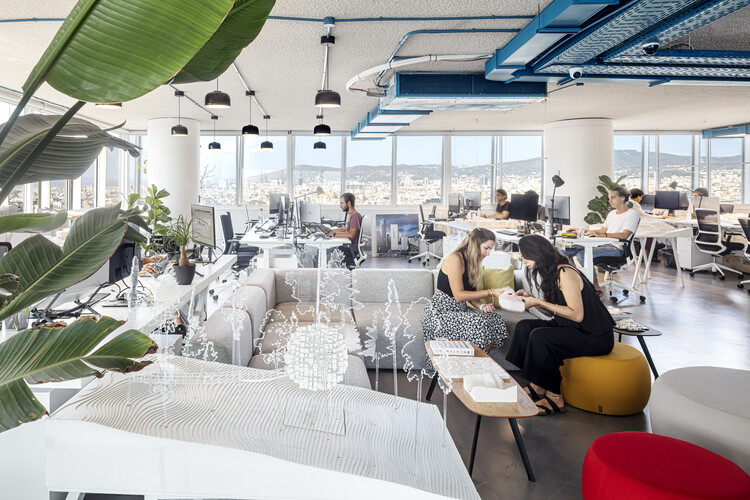 Read on for the full conversation, and discover the office spaces of BIG Barcelona.

“Giving Form to the Future by Looking at Both Past and Present”: BIG on its Latest Publication Formgiving

ArchDaily (AD): Can you tell us about your journey at BIG?

João Albuquerque (JA): I joined BIG in 2008 after moving to Copenhagen from Beijing where I worked for MAD. When I started, BIG was a small office – around 50 or 60 people. Today, we’re around 700 colleagues globally. In 2009, I took a break to do my master’s degree at the Institute for Advanced Architecture of Catalonia (Instituto de Arquitectura Avanzada de Cataluña – IaaC).

I knew I wanted to return to BIG after my studies and stayed in touch with Bjarke. Returning in 2010, the office had already grown quite a bit and one of my first projects was the Shenzhen Energy Mansion towers. There was a long period where I was only focused on the façade and did the scripting for it and later led the interiors package.

In 2012, we won Europa City, a 1 million square meter master plan on the outskirts of Paris. In 2014 we also won the competition to do a campus for the pharmaceutical company Teva in Israel, and I ended up moving to Israel with my family. In 2019, Bjarke had the idea of ​​an office in Barcelona, ​​once again, I moved over with my family and one of our first major wins was the Farfetch Campus in my home country Portugal. Incredibly proud moment for the office and personally!

AD: How did you establish the Barcelona office and why did choose Barcelona in the first place?

J.A.: Bjarke had studied in Barcelona and so did I, during my break from BIG in 2009. But the main reason is that we’ve been really keen to participate and shape buildings and cities in Southern Europe, namely Iberia. Some of our greatest architectural heroes are from that region, particularly me as a Portuguese native.

AD: What is the office focused on, and what do you seek to achieve through this?

J.A.: We seek to contribute and give form to the built environment, and genuinely make a difference through our architecture. We also seek to shape the understanding of architecture in the sense that a lot of contemporary architecture over the past decade, in Spain and Portugal, and several other southern European countries have been defined by a decade of austerity, following the financial crisis in 2008. And that has been preceded by the fact that in Spain, there is a common misconception that star architects or big architectural firms would always blow the budget.

So, one of the key messages that we’ve been trying to get across is the genesis and the nature of BIG which is to really design to budget and create added value. That’s what we do. We want to show that architecture can be the vehicle to change how we think about traditional typologies like residential architecture – the 8 House and the Mountain, in Copenhagen, are both incredible examples of that. Or Copenhill, our waste-to-energy plant which is a new park where you can ski on the roof while supplying 400,000 households in Copenhagen with energy. As a southern European, that’s a key element to bring to southern Europe.

AD: How implicated is BIG in the local market of Barcelona and Spain?

J.A.: More and more! We lost the competition for the Barcelona Institute of Technology, BIST, where we believe we had an incredible project that gave as much to BIST as to the city, but we’ve had success with Joint Research Center in Sevilla and Gastronomy Open Ecosystem in San Sebastian which are both incredibly exciting buildings. It happens that we take on projects in other regions as well – we recently completed the Biosphere hotel room in Sweden which was designed and built in about a year!

AD: How does the office function? Is it independent from the whole organization, and how involved is the main office in the decision-making?

J.A.: All offices are somehow autonomous on a day-to-day basis and led by their local partners – in Barcelona me – who are in close contact with Bjarke and Sheela, our CEO.

Our design process includes weekly updates by each design team giving the teams, myself, and Bjarke an opportunity to follow the evolution of all projects and stay close to them. Being physically present in Barcelona, ​​I’m of course very deeply engaged with each team daily as well. We started as 8 people and are currently 80 now and growing – 10-fold in 3,5 years – meaning that the office and the way we work are in constant evolution and transformation.

AD: What are the key ongoing projects in the Barcelona office?

J.A.: Typically, we open a new office as a satellite, to begin with – for example, Via West 57 is what fueled the upstart and growth of an office in NYC. In London, it was the Google King’s Cross, and in Barcelona, ​​it was a project for two towers in Madrid, which we had submitted SD for from Copenhagen. The project went on hold one week before we arrived in Barcelona. We decided to go ahead with the move anyway and did a series of competitions. In the first six months, we did five design competitions which helped land our first big project, the Farfetch, and Fuse Valley campus in Portugal – roughly 60,000 square meters for Farfetch and 80,000 square meters for Castro Group. That is our key anchor project and has been for the past couple of years. We are also working on the Joint Research Center in Sevilla for the European Commission and the Gastronomy Open Ecosystem for Basque Culinary Center – both incredible institutions. We continue working on these, in addition to six other later-phase projects that are ongoing – plus multiple new concepts which are also being developed in tandem.

Additionally, we have a healthy pipeline of other work spanning from the west to the east of the Mediterranean region, which I don’t believe we would have had the opportunity to do without being present locally.

AD: What are the future plans for the Barcelona office?

J.A.: To continue giving form to the buildings and cities south of the alps and continue our organic growth. There’s so much incredible design talent in Spain. There is no real “master” plan, aside from really trying to contribute, grow healthily, and continue doing our best thinking and building for our clients. So the future plan for the Barcelona office is really to be more integrated into Barcelona and the Spanish community, and make everyone aware that we’re here and trying to have fun, and create a positive change.