Architecture as a Transforming Agent: Urban Rehabilitation in Cape Verde

Improving people’s quality of life is one of the biggest goals of professionals in Architecture and Urbanism. When planning cities, creating housing or carrying out a simple refurbishment, we seek to improve the built space regardless of scale. The Urban Rehabilitation of Alto de Bomba, carried out in the city of Mindelo, Cape Verde, arose from the need to combat the precariousness previously found in the place. A project that required the immersion of the team in the daily life of the city and resulted in an inspiring proof of how much architecture can reveal better ways of living the city and directly acting in society. No wonder it received the Work of the Year Award in 2022, chosen by our readers as the winner among hundreds of competing projects. 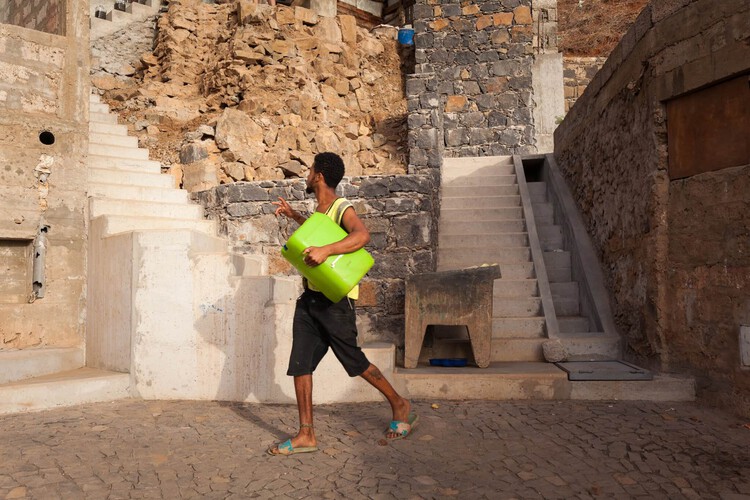 The project was carried out by OUTROS BAIRROS, an interdisciplinary team of architecture, engineering, landscaping, students and audiovisual technicians. In its beginnings, it was necessary a work of data collection – creation of an orography, survey of land uses and occupation, aerial photographs and even a survey carried out from house to house – a fundamental step to start the intervention plan, which “sets the scenarios and launches possible solutions for physical and social issues. The infrastructure, the surface design, the collective equipment are reflected on and, above all, the door is opened to moments of conversation that allow the discussion of each phase of the plan, listening to the voice of the citizens, the silences of the place and the association of the residents with the project as employees of the works in progress, in an order of 50%, at least, of the employees needed in each work that starts.”

Therefore, a strategy was made that intervenes in the territory at two levels: “the structuring, which deals with accessibility and infrastructure in the entirety of the settlement, and the punctual, which creates specific urban rehabilitation areas that guarantee the link between the structuring project and the formal city; articulates the urban fabric of the settlement with the formal city and enhances the micro-sociability of the settlement, since it acts in the meeting places identified in the characterization phase.

The structuring project focuses, above all, on solving the urban environment at the following levels: drainage, water supply, basic sanitation, energy and public lighting, garbage collection, road system, green areas and stability of slopes, economy and culture. Key points for a basic infrastructure that results in greater quality and accessibility in public spaces, transit or leisure, aiming at more comfort, safety and sanitation.

As for the specific projects, they were established with the population from their location to their program, so that the interventions aim, above all, to requalify the area from the leisure with mini basketball, meeting areas for card games and uril (traditional Cape Verdean game), access to the bilge (water distribution building), rainwater drainage and the redevelopment of the streets that allow these spaces to be connected to each other.

The project was separated into different stages and began to be implemented in 2019. In the course of its execution, which is not yet complete, it generated several other branches in different specificities that directly interfere in the life of the local population such as: creation of community gardens in urban voids, an audiovisual work that documents stories and local knowledge, launch of a hip-hop project together with Kubaka (a local music studio), generation of work (like the ten residents who came together to create Calceteiras do Carriçal ), expansion of the space for public debate in the created squares. Therefore, instruments were designed that offer the community the ability to strengthen itself and relate to other institutions and, through the participatory action of the residents, it was and is possible to maintain the knowledge generated by the work directly and indirectly in constant fluidity. Some results can be seen here.

Finally, OUTROS BAIRROS made a post on their Instagram celebrating the project after the award, but warning of its current situation and difficulties:

“Between May 2019 and December 2021, the urban rehabilitation of Alto de Bomba, based on the way of life of the local population, transformed 5,000 m2 of public space that affects 171 houses in the area and about 800 residents.

The works, meanwhile, interrupted due to lack of funding, are still to be completed in about 60% of the planned in Alto de Bomba and entirely in the areas of Fernando Pó and Covada de Bruxa.

The frustrated expectation for everyone to finally think of and from the periphery follows the struggle of the group of pavers Amdjer in the Work Amdjer in the Work – Pavers for an employment contract with the municipality of São Vicente that has not yet been signed; the helplessness of most construction workers who have been idle since the works were interrupted; the frustration of young people from the groups kubaka, bip and the Associação Comunitária Alt Bomba Unidamong others, who still yearn for the headquarters of the local association.”

The sad news of lack of funding for a work of such importance – which is gaining more and more relevance given the rapid growth of these areas in the city – demonstrates the difficulties of implementing a project of this size. We hope that the 2022 Work of the Year award will serve as a good argument and incentive to follow through with the necessary demands, and raise funds to continue the project. After all, the Urban Rehabilitation of Alto de Bomba teaches us that in addition to improving physical space, architecture and urbanism when they are allied to important causes, “of struggle and life”, it has the power to directly influence people’s lives.

You can check out the full project here and learn more about the beginning of it here.