Architecture and Landscape: 10 Projects Integrated in the Topography

As a starting point for architectural projects, the terrain and its topography point out the directions that the distribution of the program can follow. Among them, one solution stands out for the continuity between topography and architecture: lowering the level of construction and advancing the land over the roof. From this roof garden created with the same characteristics as the surroundings, the result gives the impression of an almost non-existent intervention.

The incorporation of the land as an architectural element takes up, in a certain way, the concept of caves, reinforcing an idea of ​​shelter and reception from a hybrid between the initial and natural configuration and the architectural intervention. 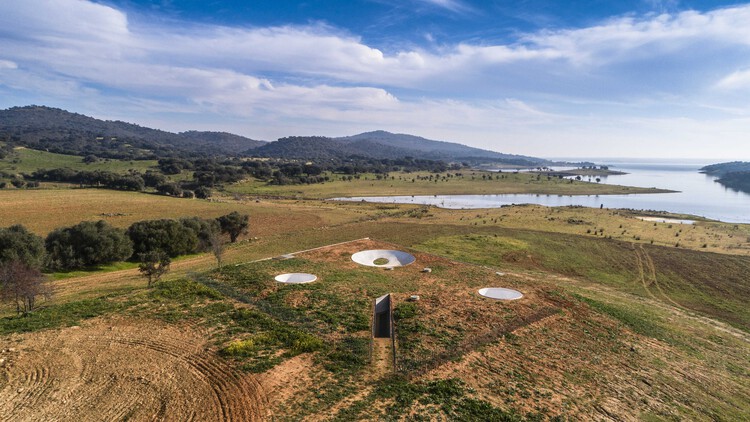 The incorporation of the land as an architectural element takes up, in a certain way, the concept of caves, reinforcing an idea of ​​shelter and reception from a hybrid between the initial and natural configuration and the architectural intervention. Thus, in an integrated and inseparable way, architecture and topography come together and become, on the one hand, a continuation of the existing landscape, and on the other, a discreet interruption of the natural slope of the land to create openings that connect the interior and the exterior, necessary to bring natural lighting and ventilation to indoor spaces.

Check out a selection of projects that fuse architecture and topography into a single, inseparable set.

“The need to create a protected shelter, at a location of disarming view, but openly exposed to strong north winds, led us to the decision to drill the slope, instead of arranging a set of spaces in line at ground level.”

“The main idea was to have a view of the forest, but the client also wanted to leave the avocado field intact,” Pardo explains, “which is how we at the decision of burying the house arrived.” Avocado trees sprout above the concealed and unassuming structure, which overlooks the treetops of the forest. The client, Pardo tells, practices hang gliding, and so the pair took a special interest in what they deemed “the fifth facade” — the view from the sky. The intention to have a minimal impact from that perspective became the project’s defining characteristic.

“As the topography and the structural design suggested a building with a great personality, we chose to make the other annex disappear, taking advantage of a gap to fit the building into the terrain. The garden roof is connected to this land, eliminating the presence of architecture for those who come from the top and only see the access stairs or another gentle slope where you can descend to enter the toy house.”

“The main idea of ​​the project was based in two elements: the existing walls, at different levels, and the platforms created by those walls. The elevations of the two house levels are broken lines that were created as continuation of the existing site walls. The topography helps to dissimulate the house.”

“The project refers to a vacation house that is developed in multiple levels, on a steep slope on the island of Antiparos. Οriented towards the East, the plot offers a direct view of the island of Paros, as well as visibility to the islands of Cyclades nearby.”

“Integrating the house into the landscape is a design decision. The plot forms part of the limit of the rural nucleus and an effort is made to minimize its landscape impact. This is a very anthropized territory. The agricultural terraces, so common on the landscape banks of the Miño and Sil, showed us how the insertion of the house should be in the topography.”

“The house in Tinos, inspired by the cavities and ledges of the rocks, emerges from the natural landscape as a man-made cave, re-creating spatial points of exposure and introversion. The entrance is found in the back of the building, through an earth crack, while different cuts in the roof allow light and air to enter the building.”

“It uses the terrain to cast a dome that covers the social areas and is the life center of the house. An inverted dome intersects it and creates an opening that lights the space, shaping its precise geometry and limits.”

“The main idea is to integrate the building into the landscape. The variant volumes in combination with the subterranean parts of the house correspond to the concept of embracing the rocky topography. Thus, the fragments οf the design intervention create a mild architectural, emphasizing to the transformation of the terrainl. Three subeterranean dwellings emerge through the design process.”

“The terrain is a natural valley where two slopes meet. On the North-South axis the slope rises between two hills while on the East-West axis the slope drops, opening up to the sea view. Two long stone walls bridge the hills, allowing the house to nestle into the interior space, maintaining the continuity of the landscape that flows over it. This simple strategy blurs the boundaries of the house and makes its mass inconspicuous within the island’s general panorama.”

Note: The quoted texts were extracted from the descriptions of each project, sent by the respective architects. Find more project references in this My ArchDaily folder created by the author.