Despite the justified controversy surrounding AI art, architects need not worry about being usurped by software that can generate images of buildings, Will Wiles argues.

The second is that AI art will remain controversial, and rightly so. Human artists fear, quite reasonably, that it will consume much of the bread-and-butter work on which they depend. To add insult to injury, the AI ​​is something of a plagiarist.

Nevertheless, it’s here. Barriers to use are falling: in September, OpenAI ended the waiting list for its Dall-E image creation platform, so it can now be immediately used by anyone who signs up. And earlier in the same month an image created by Jason M Allen using Midjourney, another AI art application, won the digital art category of the Colorado State Fair’s fine arts competition.

Art made by artificial intelligence is here to stay

Sites such as Midjourney, Dall-E and Stable Diffusion use AI to create original images from text prompts. The “intelligence” involved is more to do with learning, and computational brute force, than intuition – the technique essentially based on training computers to scramble and unscramble images until they “know” how to create an image from noise, as Daniel Fein writes in this handy explainer.

Even at their best, the images created have a characteristic sludgy quality, and some subjects, such as the human hand, appear to defeat them. Nevertheless, they are just good enough to prompt widespread fears that they will deprive perennially undervalued human artists of much of the commercial work on which they depend, while ripping off their work as human users tell programs to ape the work of creators they admire.

AI architecture feels like a more remote prospect. Architecture, after all, is a discipline that extends far beyond the visual – some day a single program might conceive a building, render it as a constructable set of drawings, detail its drains and gutters, and all along work with a client and an assortment of contractors and officials, as we expect of a human architect.

But are there signs already that software-created images of buildings are encroaching on the architect’s prized ability to generate architectural ideas? That they might remain unbuilt does not mean that AI-generated concepts would be without influence – paper architecture could be of great moment.

There are more than 32,000 images on Instagram using the hashtag #Midjourneyarchitecture, and the Instagram account Midjourney Architecture, which collects interesting examples, has more than 34,000 followers. The “architecture” showcased is mostly fantastical, but sometimes eerily real.

Sometimes Midjourney architecture can be convincing enough to create real-world ripples. The California-based Egyptian artist and designer Hassan Ragab has been using Midjourney to experiment with ideas, but also to create exaggerated tributes to the traditional Islamic architecture of Cairo and Alexandria.

One of the images from his “Cairo sketches” series, an Escher-esque wall of windows, connected by complex and implausible interwoven stonework and decorated with Islamic tracery, was seen by an extraordinary 8.5 million Instagram users. On Facebook, a post claiming this image was from an actual building went viral, and journalists started contacting Ragab asking him to verify if it was real or not.

“It went beyond Egypt: people in Iran claiming that it’s a Persian tomb, others claiming it’s a Spanish building,” Ragab wrote on Instagram. “Also, what was really ironic was how people were arguing (backed up by their own beliefs and ideologies) about the whatabouts of that building.” Fact-checking news stories about the image followed, including from the AFP.

It usually takes no more than a second to determine if an image emanates from AI or not, but it seems that few internet users can spare that second, especially in the abattoir of truth that is Facebook. So there is potential for confusion and deliberate mischief – but not of a new kind, even if it is using new technology.

For the time being, AI architecture is simply another form of architectural vaporware: the bling-bling never-to-be-realised concepts and dubious utopianism that spread online like visual fungus. But even that fungus has little nutritional value, as small and ambitious design practices and render studios use it to promote their work and get attention.

And the same applies to the fantastical architecture created as art by the energetic and often brilliant digital artists who gather in places like the online community DeviantArt. If some people mistakenly take the images as real buildings, or projects that might shortly be realised–if some studios slyly encourage that impression in their copy–that’s a matter of their own conscience.

For the time being, AI architecture is simply another form of architectural vaporware

AI architecture slots in addition to these fields, producing shaker results. Allen’s architectural backdrop is superficially impressive, but there’s less than meets the eye. It is just an impression of baroque ornamentation and sophisticated structure, an interpretation lacking an original. It has the quirks that can be seen throughout AI architecture: a distinctive smile; the inability to follow a line; a strange blindness to symmetry; and fudged, impossible edges, joins and details.

And, of course, we remain firmly in the realm of the visual, not the actual. The machine is wielding pixels in two dimensions, not materials and space. Architects can rest easy that AI isn’t coming for their jobs just yet, although it’s not impossible to imagine AI images winning a student or drawing competition, if allowed.

In general, architecture audits new technologies on its avant-garde and then construction employs them in the boiler room. Prefabrication briefly let the metabolists dream of endless reconfigurable flexibility, and today delivers cheap uniformity. CATIA was popularized by Gehry and has become part of the background. Having promised parametric exuberance, 3D printing will probably end up being used for service cores or something similarly unglamorous. 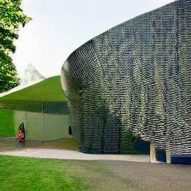 Artificial intelligence is more likely to find a role generating apartment floor plans or resolving service layouts – that is, exactly the areas where computers are most heavily used already – than any visionary creative application.

The visionary is naturally what draws the eye, though, and it’s worth considering the appeal of the imagery on #Midjourneyarchitecture. That might begin with regarding some of the quirks listed above as qualities rather than shortcomings.

Obviously the outcomes depend on the inputs of the human user – which, generally, we don’t know – but it is interesting that there are recurrent resonances with the work of a few particular architects with very strong individual styles: Gaudi’s biomorphism, Eisenman’s uncanny geometries, liquid Hadid.

But, most enticing, the AI ​​is a stranger to orthodoxies. The fascination it generates should be discouraging to architecture’s hardline ideologues and style partisans, who fixate on rigid objective conceptions of beauty, and who regard deviation as a moral as well as aesthetic failing. The machine changes. Generative architecture is thoroughly degenerate, and all the more interesting for it.

Will Wiles is a design writer and the author of four novels, most of them recently The Last Blade Priest.

The top image is by Hassan Ragab.