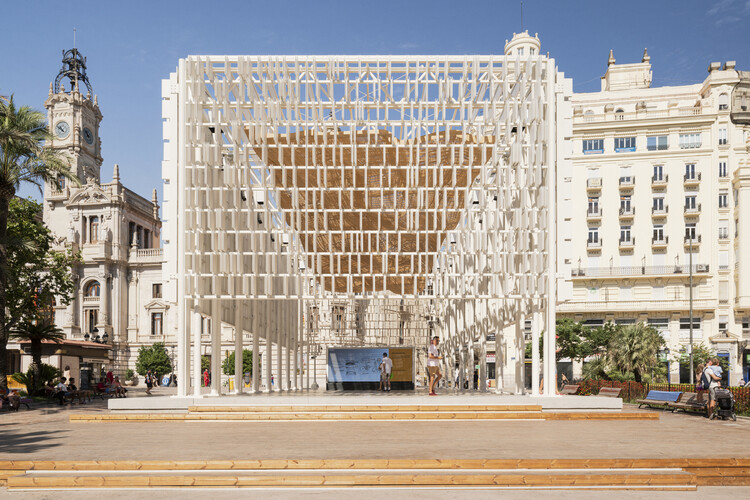 Text description provided by the architects. Miguel Arraiz explains that the project has been conceived as a gift for the present and future of Valencia. The architecture and design of Agora Valencia explore the materials and artisan tradition of the Valencian territory, as well as extolling its roots in order to take advantage of a unique opportunity to bring design and its transversality to the citizens, businesses, and institutions. The materials and production systems used to allow for the modular and dismountable format of the pavilion, constituting a firm commitment to circularity and durability.

With an area of ​​350 square meters, this modular pavilion tells the story of a renowned design born on the shores of the Mediterranean, of materials arising from ceramic innovation and traditions such as the wood “vareta” by the artist Manolo García.

Agora Valencia consists of a structure with dimensions in a plan of 24 by 10 meters and a height of 9 meters. The building is covered with a skin developed by the companies Inalco and Wandegar from pieces of MDI placed perpendicularly on the façade to filter the light as the hours go by. In fact, light has been treated as one more construction material, and other elements such as the upper deck, of great aesthetic power, also contribute to this. The piece of brace that roofs the pavilion is made by Manolo García, master carpentry and Fallas artist who returns to the square where he has “planted” his creations so many times. This element simulates the waves of the Mediterranean Sea in reference to the city as a historical point of union between different cultures.

The Inalco signature is present on the façade and ceiling, designed with MDi from the Silk Blanco collection. MDi (Minerals, Design, Innovation) is an innovative surface, developed with the purest minerals, which allows the body and surface to present total aesthetic continuity. Mdi is a sustainable product as it is formulated with 50% recycled material from its own process. Likewise, its Full Digital technology, unique in its sector worldwide, saves 70% of water and avoids the use of solvents.

For its part, the engineering company for innovative technical applications for ceramic ceilings Wandegar has taken on the Agora Valencia project as a real challenge, for which it has devised an architectural envelope solution that stands out for its simplicity and lightness without compromising safety or the modularity of the format.

The Arqueha studio, coordinator of Plan Zero for the climate transition of three neighborhoods in the city of Valencia, has been in charge of carrying out the technical development of the project by applying prefabrication and sustainability parameters.

With the use of digital tools such as BIM, together with parametric design, all the components of the building have been solved in an industrialized manner, making each of the frames that support the slats unique, prefabricated, and removable.

Agora Valencia is also a space that has been developing the following thermal comfort strategies. Its design takes into account climatic variables such as air circulation and solar radiation, and directly influences the improvement of the feeling of comfort in relation to the rest of the square. The solar protection formed by the skin of vertical slats, manages to reduce the amount of solar radiation coming from the east and west, while the wooden roof acts in a similar way with the light coming from the south, allowing in any case the natural ventilation of the building. The sum of solar protection and ventilation, manages to lower the comfort temperature inside the pavilion by up to 10 degrees compared to any other point in the square, and all this without energy input and therefore with 0 CO2 emissions.

Why did Valencia need a pavilion?

Following in the footsteps of the pavilions that other world capitals of design such as Helsinki (2012) or Taipei (2016) built as the heart of their program, where design can be seen and experienced, Valencia takes advantage of the opportunity to bring design and its transversality closer to the public, companies, and institutions from their own venue.

The city of Valencia as we know it is the result of more than a century of design. Urban, architectural, artistic, product, interior, and graphic design have allowed it to earn its place as a city with a global vocation. It is hoped that Agora Valencia will be the meeting point for Valencian society, tourism, and people and that it will encourage everyone to participate and to get to know what it means to be the capital of design. A place from which to become aware of the presence of design in daily life, its role in the desired city model, and its importance in the projection of the Valencian industry and economy into the future.

Since the official designation by the World Design Organization, Valencia knew that it should not only have a central space to communicate the schedule of the World Design Capital 2022, but also a meeting point that would connect it with people. For this reason, they imagined a place in the heart of the city where they could tell the story of Valencian design, which is that of its industry, craftsmanship, and the backbone of an entire territory, and do so with a forward-looking approach to sustainability and materials. Agora Valencia has become a new building to admire and enjoy in Town Hall Square, a construction that brings together some of the features of Valencian identity and embodies them in its architecture. A building that speaks of the Valencian industry through its ceramics and of the waves of the sea through its roof, which is, in turn, a tribute to the Fallas.

Own program of activities open to all audiences

Agora Valencia has been conceived as the strategic nerve center of the World Design Capital Valencia 2022 program, in order to reinforce the scope of the countless projects, exhibitions, talks, and meetings that take place every day in all corners of the city. In this way, from this month of June onwards, it stands as a meeting point from which locals and visitors alike can enjoy Valencian design and get to know professionals, entities, institutions, and companies rooted in the culture of creativity and innovation.

This venue is a central meeting point where you can learn about the World Design Capital Valencia 2022 program and, at the same time, a point of transmission and exchange of ideas, an open forum for round tables, conferences, and presentations on design, as well as for the educational workshops and both social and professional meetings.

The program presents debates on how design improves people’s lives and will bring together both specialists and citizens who want to join in. It also offers meetings to reflect on the transversality of design in areas as diverse as urban planning, ecology, international projection, the image of the city, sustainable growth or internationalization; and incorporates collaborations with other leading entities in the sector.

Of particular note are the “Design and City” meetings held on the 22nd of every month from July onwards, alluding to the capital year, in which Agora Valencia becomes a link between citizens, institutions, and professionals to discuss how design improves people’s lives.

On the other hand, the schedule at the Agora includes continuous activity for children with workshops for families at weekends, as well as musical and artistic proposals. The pavilion is also a space for promoting Valencian creativity through meetings with the media, live radio shows, presentations by professionals, and more relaxed encounters.