Aging at Home: Preparing Architecture for an Elderly Population

Aging means learning to live with dependence – physical, social, or spatial – and in this long process, which cannot even be measured in years, it is understood that aging is closely related to genetics, lifestyle, location, and socioeconomic group. Therefore, this very diverse process varies according to each individual, to different interests as well as abilities and preferences in the way of life. 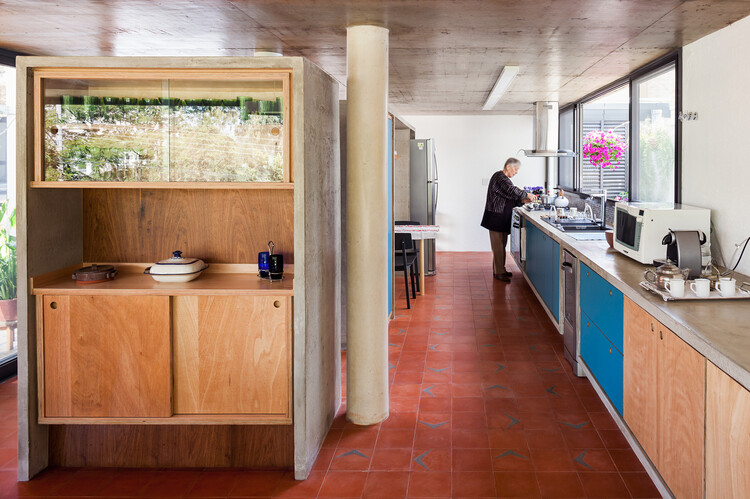 However, avoiding generalizations, the concern with the aging of the population has become the agenda in different disciplines, including architecture. According to UN projections, almost a third of the population (32.5%) will be aged 65 or over in 2050. In Brazil, a projection by the Brazilian Institute of Geography and Statistics (IBGE) shows that the number of elderly people will exceed children and young people in 2031. By 2050, Brazil will be the sixth country in the world with the longest living.

In this sense, understanding architecture as an important tool to accommodate this growing user profile. Many studies and interventions have emerged through different approaches, not only of a spatial nature, but also of a social nature. In the conception of facilitators for daily activities, universal design strategies are creating accessibility and comfort in displacements, as well as closer relationships with natural elements — wind, sunlight, vegetation. However, in addition to these factors, subjective aspects are also taken into account, such as those related to integration, protection and independence, always seeking to strengthen social connections. The role of architecture in welcoming this public can be defined through spaces that increase the possibilities of active aging with quality of life, independence and sociability, that is, environments that integrate them among themselves and with society, far from segregation and stigmatization. Considering this context, it is possible to see two lines of action within architecture: the adaptation of existing buildings and the design of new projects with specific qualities.

Changes in existing buildings are being directly motivated by the aging of its residents. An interesting example is the apartment blocks in Ommoord, a residential neighborhood in Rotterdam, the Netherlands. After 30 years of its construction (1968), the buildings no longer met the necessary standards, as its resident population underwent a considerable demographic change. As a result, in 1999, Hans van der Heijden Architect was commissioned to update the buildings’ technical performance as well as find an architectural solution for different resident profiles. In a co-design process that involved the inhabitants themselves and lasted 9 years, different strategies were drawn up to rethink the spatial organization of the building, as well as redistribute and section the apartments according to social groups. As a result, parts of the development were reserved for the elderly residents. For example, the ground floor and garages became health care facilities, and other garden-facing apartments and a community center were added. More stairs and elevators were installed to improve the accessibility of the upper apartments and to shorten the length of the access corridors.

A similar initiative took place in the Spanish town of San Andrés del Rabanedo. Under the command of the architect Oscar Miguel Ares Álvarez — the same author of this interesting project of housing for the eldery — the neighborhood of La Pinilla is being restored so that its inhabitants, 30% of whom are over 75 years old, can stay in Their homes, neighborhood and family environment despite advanced age. We are talking about the renovation of approximately 500 houses, with the support of the regional government, to adapt and accommodate the elderly population. The decision is based on the idea of ​​offering healthy aging to its inhabitants, reducing economic and social costs that entail the creation of homes adapted to their needs. For the architect, the home for the elderly must be compartmentalized, with lots of light and space to store objects that are part of their history and, above all, be accessible through the senses. Álvarez explains that the elderly not only have locomotor difficulties, but also sensorial difficulties, and architecture can stimulate them through color, light and texture, helping them to gain more autonomy.

However, in addition to the adaptations, new developments are being built under the assumptions of the 60+ user. They include serviced apartments, community housing and co-housing as some formulas that go beyond the traditional concept of the nursing home, distancing them from the possibility of institutionalization. The term known as Aging in Place It encompasses the typologies mentioned above and, in general terms, allows housing to incorporate technologies that facilitate everyday life, without improvisation or adaptations, and also without looking like a clinic. Within the enterprise itself, in addition to spaces that encourage socialization among neighbors and the community in general, there are also service companies that offer emergency and intensive care. The BIOOS project, in Curitiba, developed by Ricardo Amaral Arquitetos Associados for the construction company Laguna, is an interesting example of this new format as it includes apartments exclusively for the elderly (60+), spaces for medical clinics and a basement with shops and services targeted to this audience.

There are still those who opt for an old age away from the urban chaos, as in the JIKKA project, built in Japan as a final abode for the clients — two women around sixty years old — with a social worker and a cook, and spaces designed like a primitive cabin.

In this line, developing the concept of shared housing, the German architect Matthias Hollwich, professor at the University of Pennsylvania, in his book New Aging: Live Smarter Now to Live Better Forever, presented the idea of ​​flex living, apartments that have two entrance doors with two bedrooms connected by flexible space. With this typology, Hollwich seeks to offer a variety of arrangements like two friends living together or a resident and a caregiver.

Understanding architecture from the perspective of the “new seniors” has been a challenge, as this change refers to a paradigm shift. Many studies point out that aging in a healthy way is related to the idea of ​​allowing people to age in conditions similar to those they have experienced throughout their lives and this to be the path that architecture should follow, whether adapting existing buildings or building new ones.