estudioBamBam renovated an old family home in the village of Segura’s orchard, Spain. The project aims to conserve the almost 100-year-old antique home while adapting it to current lifestyles. This space maintains its identity with a rectangular floor plan divided into different tiles and a gabled sloping roof made of flat, limestone masonry walls, wooden arches, and a south-facing patio. The constructional elements have been reused and several identity elements of the original house have been restored. Simultaneously, light plays a key role in creating a new relationship with the interior spaces and the patio.

This family home was built by the owner’s grandparents. She was born there and now, after many years uninhabited, she returns with much love and enthusiasm to give it a new life with her family. Appropriately, there is a strong reason for the project to be based on respect for the history of the house, as well as conservation and enhancement of its traces.

on the ceiling, part of the supporting wooden structure of the cane and plaster ceiling has been preserved

all images courtesy of estudioBamBam

Preserving the original identity of the residence

Designers Antonio Campos and Adrián Segura at estudioBamBam aimed at preserving the rich structural components and stylistic traditional forms within the building. Among the architectural elements that transfer the historical identity of the building to present-day functional spaces are the arch, the pavement, the wooden ceiling structure, the ashlar foundations, the interior woodwork and the traditional blinds. The arch and the pavement are the main elements of this house– using them as a guide to establish the new spatial, material and color strategies. The restored arch was and still remains the welcoming architectural element of the house, which naturally shapes the essence of the residence.

The space is completely reformed and ordered with breathable rooms connected with a new arch, establishing an interesting language between the years 1927 and 2022. Giving even more importance to the Arch, other curved elements occupying the residence: from the hall and access to the children’s bedroom, to the patio with infused exterior cabinets and elements to support vegetation. The original pavement of the house is a beautiful (20x20x3cm, 7.9×7.9×1.2inch) terrazzo with a unique brick-red triangle pattern that is alternated to create the two different design arrangements. 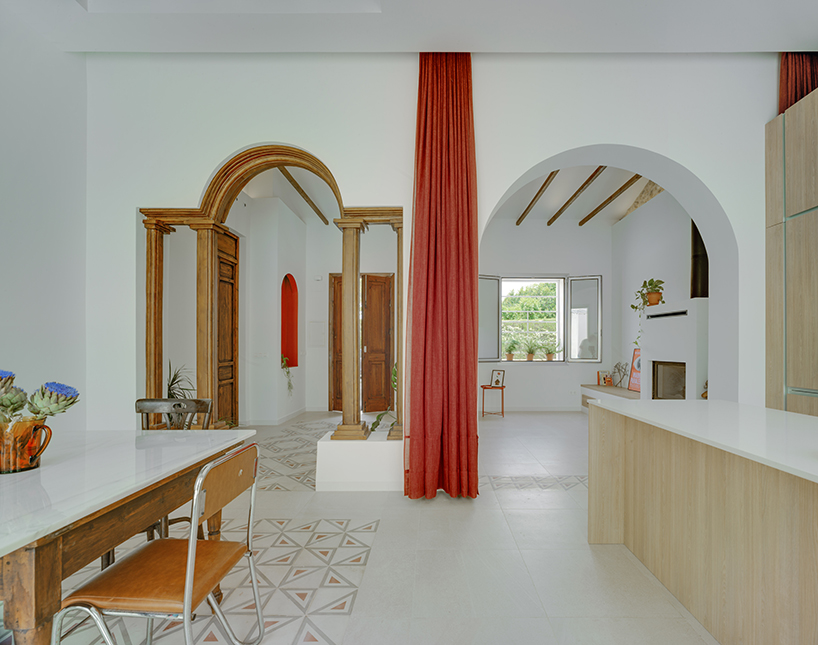 A curtain that brings theatricality, intimacy, subtlety, flexibility, dynamism and color to the house, and coexists enhancing the beauty of the two main arches.

For the complete energy rehabilitation, it was necessary to lift all the original pavement. The intervention was carried out with great care in order to recover and reuse more than 300 good conditioned pieces to reintegrate them into the house respecting the original patterns. Thus, they have been reincorporated in the form of a mosaic carpet at the foot of both sides of the Arch and access and dining room. The designers also introduce a third tile pattern to connect the opening that resulted from creating a new arch from the central wall structure.

Part of the supporting wooden structure of the cane and plaster on the ceiling has been preserved, and has been incorporated as an element of the interior space. The nature of the masonry wall without the exterior cladding has been exposed, marking the location of the old chamber below the roof, in the dividing wall between the ceiling and the sloping roof. The interior and entrance wooden doors have been recovered, conserving the great height of the ceiling. The blinds on the windows on the main facade have been replaced, because they are still valid elements of solar control and privacy, in addition to the warmth and domestic character they provide. On the facade, the foundation ashlars of the structural wall have been discovered. 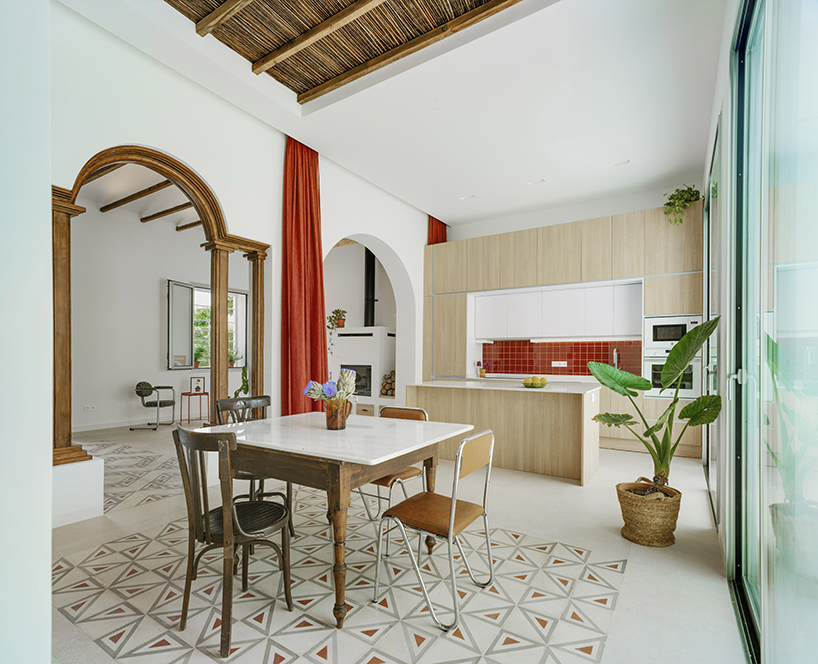 the arch and pavement characterize the residence

The spatial proposal creates a large space for interactiveness, connecting the kitchen, dining room and access inside the house; and an outdoor patio that becomes the heart of the residence linking the residence together. This relationship generates a continuous area, but not homogeneous: each area has particular spatial conditions and can be partially independent with the use of a large separating curtain that runs along the arcade in the central wall. A curtain that brings theatrical elements, intimacy, flexibility, dynamism and color to the house, and coexists enhancing the beauty of the two main arches.

The home has been intervened, with white walls and sand pavement; Introducing color into certain key elements: the curtain, the front tiling of the kitchen, the hall, the blinds and the pavement itself. The proposal is completed by the dark wood in the restored carpentry and the vegetation in the interior, patio and facade. The energy behavior of the house also combines traditional passive strategies with current ones. Connecting and opening up the living spaces, in addition to improving the spatiality and use of the house, which generates a large cross-ventilated volume between the street at north and the patio at south. 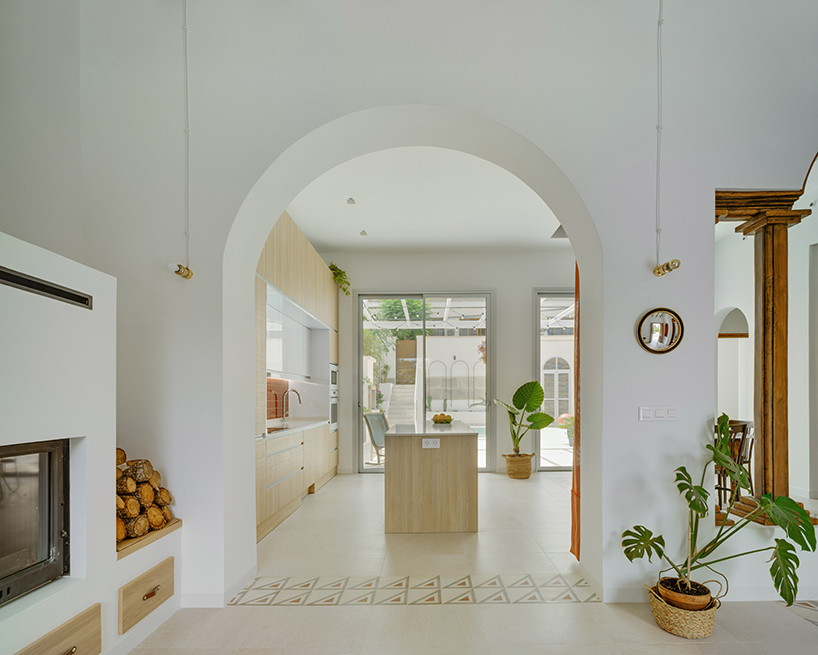 The pergola, captured by the old vine, provides sun protection in summer, allowing the passage of sunlight in winter with the fall of the leaf. In addition, the presence of this vegetation establishes a pleasant transition between the dining room-kitchen and the patio, providing climatic balance at each time of the year. In addition to these traditional passive energy efficiency strategies, the house has incorporated current elements and technologies, which have given it a BA energy rating. Insulation throughout the envelope, high-efficiency carpentry and glass, solar control elements, high-efficiency climate installations and solar thermal installation for DHW. 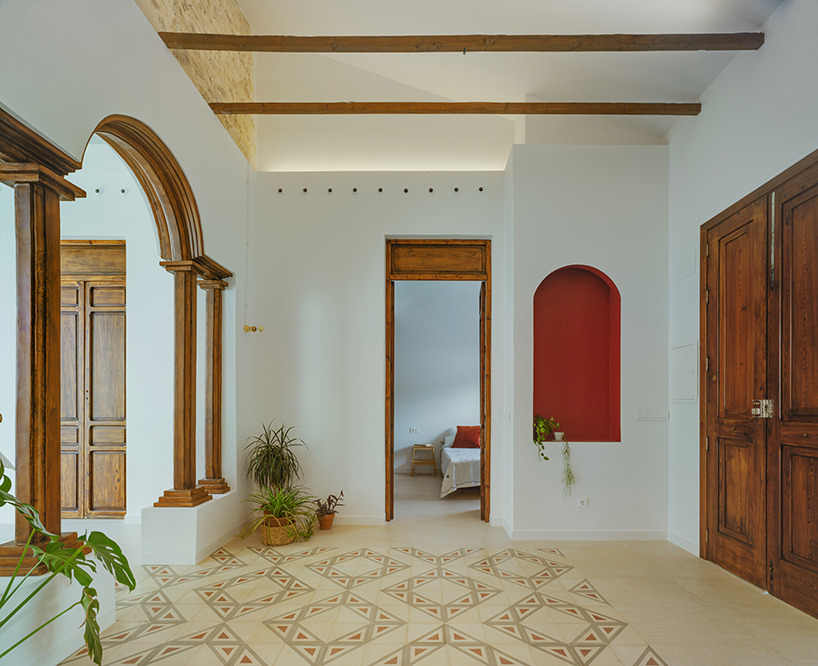 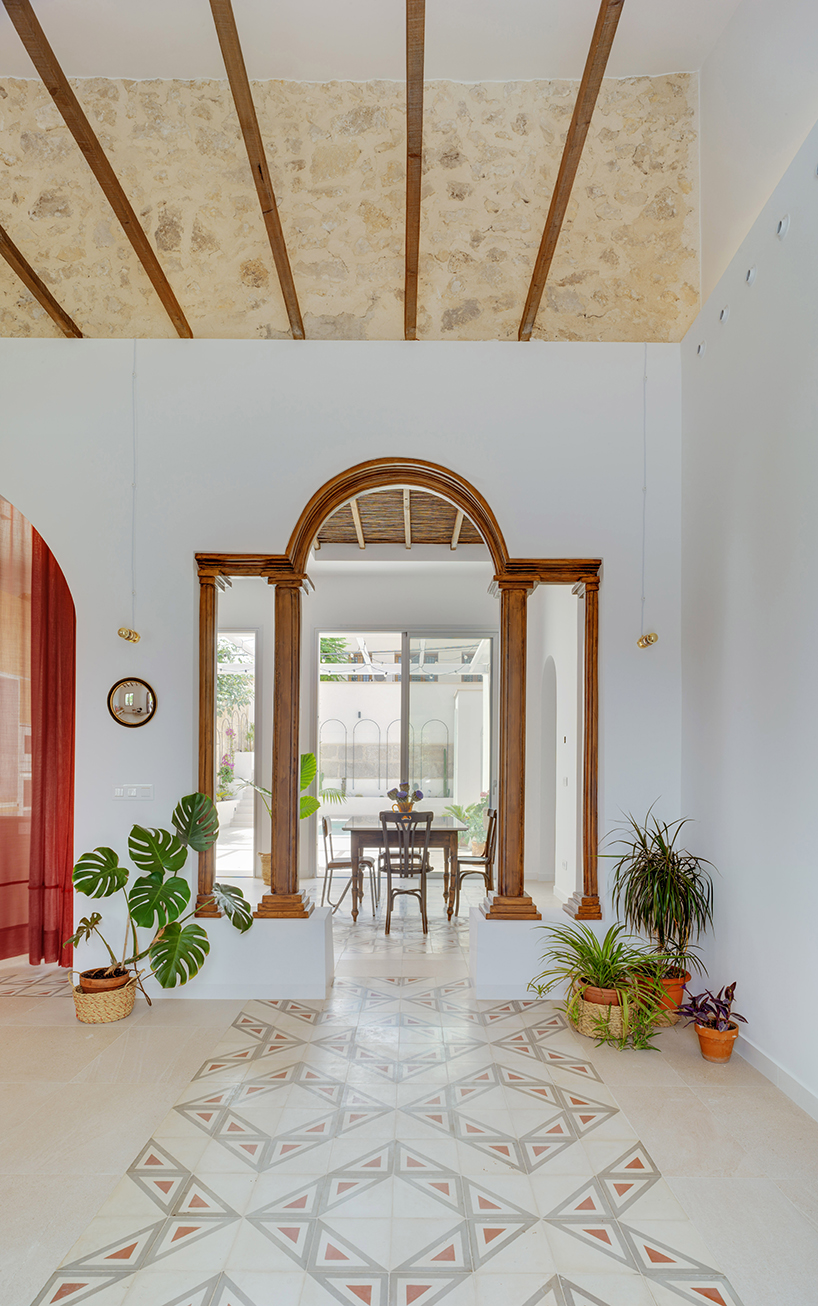 restored arch: the welcoming architectural element of the house