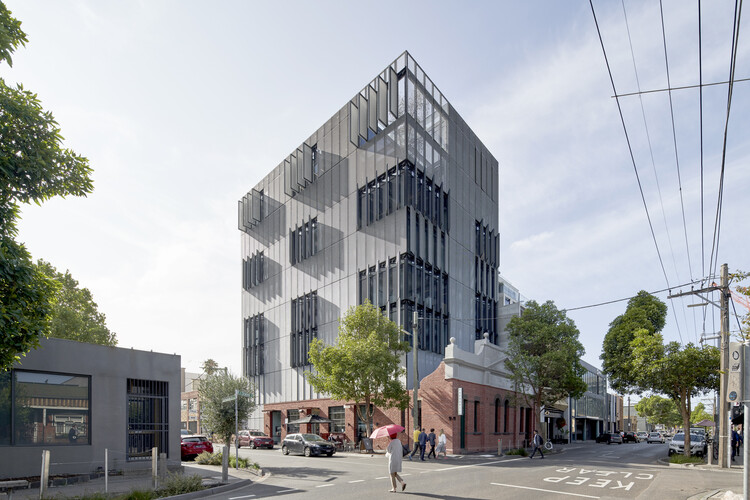 Text description provided by the architects. Dynamically shaped by Melbourne’s changeable climate, 9 Cremorne St by Fieldwork binds a historically significant factory site with a new, sustainably designed office building, accommodating builder, Cobild’s, headquarters. Built on the traditional land of the Wurundjeri People of the Kulin Nation and situated on a tight city fringe corner site, the new addition is thoughtfully designed for Australian conditions. The building dynamically responds to the changing environment, while playing the role of a corner ‘bookend’, marking the gateway to the Cremorne precinct.

As ‘big-picture’ builders with an eye for detail, the client sought a home base that would showcase their brand and capabilities. Fieldwork’s familiarity with Cobild, established over years of project collaborations, allowed the design team to develop a responsive solution that pushed the boundaries of the brief. “We wanted the building to be a living, breathing expression of what Cobild stand for, their skillset and high level of craft,” says Joachim ‘Quino’ Holland, Co-Director of Fieldwork. To this end, Fieldwork sought to challenge the status quo of ‘glass box’ office buildings, by introducing an innovative ‘second skin’ of operable screens. Constructed from bespoke, expanded aluminum mesh, this skin significantly reduces heat load and glare on the building’s slab-to-slab glass façade and enables occupants to customize the building envelope in response to sunlight, natural ventilation, views, glare, and temperature.

The mesh was chosen specifically to help create a surface of micro sunshades that provide protection from the harsh northern and western sun, while still allowing views through. Enlivened by changing light qualities, “the anodized façade creates an ephemeral effect – a shifting curtain backdrop to the heritage experience at ground level, with a beautiful translucency at night,” reflects Quino. Carefully sleeved behind the tactile warmth of the factory façade, the building’s strong, elemental form is visually distinct from the heritage fabric – sensitively set back from the architecturally significant western façade and nestled closely behind the simple detailing of the northern façade.

The corner of the building is emphasized with the insertion of a terrace and a mature olive tree; a reference to the Israeli heritage of Cobild’s Directors, Coby and Rotem Rotenberg. Here, the mesh screens create a permeable veil that hints at the activities beyond, while upholding the building’s pure, platonic geometry. Below, fieldwork approached the original heritage fabric with sensitivity. In consultation with Bryce Raworth Heritage, the western façade was carefully restored to its former glory, while the simpler northern façade, which was not structurally sound, was demolished and rebuilt using refurbished steel windows and original brick.

Red mortar with a raked joint subtly differentiates the original and rebuilt sections of brickwork, while an existing downpipe recess is reworked as a shadow gap, further articulating the junction. “We wanted to show, to the keen eye, the division of original and reconstructed architecture,” reflects Quino. The building’s mesh façade drops down in the location of the carpark entry to seamlessly integrate with the architecture, while expansion joins in the brick facade are carefully aligned to the mesh panels facade above. These refined details produce an expertly crafted piece of architecture.

Cobild occupies the building’s top three floors, which offer commanding views across Melbourne’s city skyline, softly filtered when the screens are closed. Each screen is fitted with an electronic actuator, with wind and temperature sensors overriding automatically closing the screens in high heat or wind conditions. Internally, the building’s full-height glazing contains louvers for natural ventilation which occupants can independently open of the screens, “allowing each floor to purge heat at the end of the day and cross-ventilate when a cool change arrives,” explains Quino.

The vertical courtyard, scaling a two-story void, extends the workplace into a series of landscaped terraces. The perimeter is shrouded with a fine, stainless-steel mesh, mitigating the need for balustrades and allowing for uninterrupted views to the city and sky. An additional rooftop entertainment space fosters a thriving community atmosphere, addressing the client’s desire for a “healthy, happy, and productive work culture,” says Coby Rotenberg, Director of Cobild.

In addition to the building’s operable façade, the project achieves a 5 Star Greenstar rating together with urban and social sustainability measures. Carparking numbers are reduced from statutory requirements by 78 percent and e-charging facilities within the fully automated car stacker are provided to support low-emission vehicles, alongside end-of-trip facilities to promote active transport methods and reduce greenhouse emissions. Comprehensive digital displays of water and energy use are provided for each office tenancy which produces monthly reports on consumption trends. Solar photovoltaic panels on the roof contribute to the operation of the external screens and common area energy demands. Landscape zones are provided to three terraces, creating green space in an area deficient of local outdoor amenities, with water storage and filtration provided on site.

“We could not be happier with the outcome,” reflects Rotem. “Fostering a great working environment is critical to our team and driving a quality design has allowed us to gain approval for an additional two stores, facilitating an ability to expand the business into the future. The unique façade screens allow our team to adapt their workplace throughout the day — we love watching it in action.” The result is an innovative and sensitive response to place; a highly resolved decided outcome that celebrates its context and collaborators in equal measure.